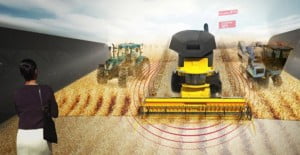 AGRICULTURE IS full of new technologies, mind revolving new products and trends that have brought the changes in the Midwest crop farmers. These new products may include open field server, biofuels, development of drought resistant crops, global warming, biomass harvesters, autonomous, E premium tractors and among these, 3D printer is one of the innovative technologies that increase the value of agriculture by making innovative products.
3D printer is a type of industrial robot used for the purpose of making three dimensional objects. It is also called additive manufacturing because in this process, three dimensional objects are made by adding material in layers. In 3D printing, different processes are used in which layers of related material are positioned under computer control and the 3D printers gives three dimensional object. In creating three dimensional objects, first of all we make design of object through the software Computer Aided Design (CAD). After making design, file is sent to printer and related material is placed in layers on the platform. 3D printer deposits these layers and made the object.
When we think about 3D printer, we imagine that this a machine used for making small plastic object or on large scale industrial machines. There are also extremely large 3D printers which are used for printing of concrete structures and other large objects. The most important printers are those which can print the food material. Such types of printers are in early stages of their development. All of these printers have ability to bring the resources in country for people, but still none of these printers ensure about immense food production to feed the hungry people.
The FarmBot foundation gave the solution by discovering 3D printer that is capable of farming. Farmbot is a type of 3D printer like machine that can be used for the farming and gardening purpose. The FarmBot foundation found the software, hardware and data solution through which anyone can operate the 3D printer (FarmBot). FarmBot has ability that it can operate most of the farm practices that require large amount of labor. This machine can be loaded with different tools such as discs, watering nozzles, seed injectors, burners, plows, cutters and sensors. The hardware used for this is completely open and accessible on any size of farm or garden plots.
This innovative machine provides a huge amount of benefits. Some of these are given as under:
• It has ability to sow the crop in efficient manner, as it sow the seed at proper depth with proper distance according to layout as commanded to it.
• It has ability to do farming practices such as spraying of pesticides, water and fertilizer. In this way, each plant is programmed for its specific water/fertilizer requirement.
• It is used to decrease the soil compaction that is created due to tractor or other heavy machines used on farm.
• It allows for the removal of weeds through cutters, burning and spraying without damaging the plant parts.
• It is applicable in all fields either in small fields or on large scale farms.
On the other hand, it can be used from anywhere in the world. It can work 24 hours in a day and can create large amount of farm designs. Its tremendous potential is that it allows creating “polycrops” in which different crops are mixed. Traditionally it is impossible on farm as each crop has its own requirements. For example, some crops require more water than others and also stages of water requirements are different, some require more water at reproductive stage than vegetative stage. FarmBot software make this easy, as each plant is programmed individually for its requirement.
With the help of sensors, FarmBot can measure the moisture level, rainfall, humidity and temperature, pH level in soil, wind speed and direction. By this calculation of total expenditure can be done for the purpose of maximizing crop output while decreasing the cost. With the help of this farmers can share their data regarding production to anyone and anywhere, so that every farmer can have access to best farming practices for its FarmBot machine.
Altogether, FarmBot seems to be a perfect solution for improving the efficiency of established farms and also can provide food to the world.
Source