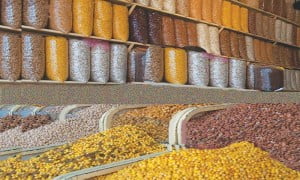 PAKISTAN is having another bad year for pulses, with the staple’s production having dropped by almost 40pc. Against its total requirement of around 1m tonnes, its yield is around 600,000 tonnes

This is because of multiple factors, including a disrupted rain pattern and floods sweeping through the river beds where most of the crop is harvested.

Weather is a decisive factor in the production of pulses, as the various types of the crop require different temperatures; have varying levels of sensitivity to rain, and have different maturity spans. With the weather turning erratic, pulses take the biggest hit compared to other crops.

Another factor for the lower production is the farmers’ shift towards high-value crops, which has left the country with a deficit of pulses and led to higher prices.

With a cropping intensity of well over 150pc in Punjab, pulses have little chance to stand against other better yielding crops

This is precisely what has happened this year. And the prices of almost all pulses — lintel, gram, moong and maash — have risen 30-35pc since Ramazan.

And since most of the pulses imports are restricted to Karachi or urban Sindh (because of high freight charges for upcountry transport), Punjab is facing the major brunt of the shortage.

The district administrations are raiding small shops that are violating the official rate list (which has lost relevance because of rising prices) and arresting shopkeepers. The campaign is gaining momentum and the reaction from the retailers is heating up as well.

The retailers see the raids on their shops as unjustified since prices in the wholesale markets have gone up and heavy hoarding has reportedly taken place over fears of shortages. But the raids are continuing and the fines and the arrests are now daily occurrences.

Punjab needs to look beyond this fire-fighting exercise that it undertakes every second year as the production of pulses falters, and instead plan on expanding the production to eliminate shortages. How will these raids bridge the gap between the demand of maash (over 55,000 tonnes) and its production (9,200 tonnes)?

No doubt Punjab is running a ‘pulses promotion project’ this year, worth Rs127m, that also involves providing healthy and certified seed and improving farm practices. But the province was also supposed to come up with a support price mechanism in order to ensure producers’ rights; something it has totally ignored.

Occasional weather problems like this year only worsen a permanently bad situation. No project, however well conceived or implemented, can force farmers to sow a crop that does not bring them financial benefits. Pulses are one such example.

The second major challenge faced by Punjab is that whenever water supply is ensured, the farmers quickly replace pulses with some other crop. Masoor is one such example. It suffered because the growers saw it more profitable to grow wheat, which has an official support price. Meanwhile, masoor’s current production stands at 10,000 tonnes against its national consumption of 60,000 tonnes.

Punjab itself is running two huge programmes of olives and grapes in its rain-fed areas, further maginalising the profitability of pulses for growers.

With a cropping intensity of over 150pc in the province, pulses have little chance to stand against other better-yielding crops. Punjab has two choices. The first is to improve the pulses business at the risk of social and political cost in the urban areas.

The second involves it going to the federation, which should conceive an integrated national programme and convince the other federating units to expand their pulses output.

But the raids have only helped pulses disappear from the market as retailers face a double jeopardy: if they sell them at official rates, they suffer heavy losses; if they don’t, they face fines by the raiding parties.