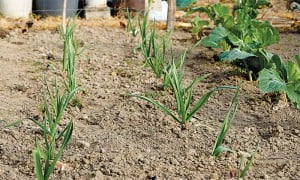 First and foremost, many gardeners tend to forget that soil is a living, breathing, mass comprising literally millions of organisms, bacteria, fungi, particles of sand / rock and assorted plant material which are broken-down and combined into what we know as soil. This happens by the joint actions of weather related erosion and decomposition helped, invaluably it is important to add, by the actions of aforementioned organisms — these are minute and largely invisible to the naked eye — aided by the living insects, such as ants, beetles and earthworms which, being larger, we can see. Left completely to their own devices, such as in virgin rainforest for example, these intricately related life-forms go about their natural business of first creating, and then maintaining, healthy soil conditions which are incredibly fertile until human intervention takes place, the result of which can be catastrophic.

Chemical interventions on a garden scale, especially when combined with atmospheric and water pollution, are often to blame for ‘unbalancing’ what was a previously ‘balanced’ soil macro-system. It can, in extreme cases, result in total loss of soil fertility and actual ‘soil death’ which can take a very long time, plus, a huge amount of work, to resuscitate.

Recognising — then accepting — that soil is alive and thus, as with all living ‘beings’, needs to be carefully fed, watered, generally respected and nurtured is the key to successful gardening and doing this naturally — meaning organic — is the obviously healthy way to grow.

Healthy soil is essential for healthy growth of plants

Irrespective of your soil type and as long as drainage is up to the mark — if it is not so this needs to be rectified — the majority of soils can be vastly improved by the addition of lots and lots of purely organic material, not just once but on a continual and regular basis. This provides the basic requirements — along with water, of course — for the soil’s inherent macro-system to begin to rebalance itself and for the millions of invisible organisms to get back to their endlessly industrious work.

‘Organic material’ does not just mean animal / poultry manure which, sadly, these days and especially in urban areas where buffalo are penned and factory chickens / eggs are the norm, is often highly contaminated with chemical based feedstuffs, antibiotics, etc. It is far better, if organic is your goal, to use homemade compost where you control the ingredients, grass clippings, leaves, disease free plant debris, shredded paper / cardboard, chopped straw, wood shavings (not walnut or pine as these contain naturally occurring substances that can inhibit plant growth) helped along by generous amounts of homemade, liquid, organic fertiliser. (Recipe will follow shortly). It is possible that paper / cardboard and chopped straw may contain small amounts of chemical residue so the decision to use or not is entirely up to you.

All of the aforementioned materials can, if you like, be dug into the soil or they can be spread, as ‘mulch’ on top of the soil surface, around but not in direct contact with plants / tree trunks and left to be weathered / rotted down at their own pace which will be accelerated by the hard labour of insects such as beetles, earthworms, etc. Mulch serves a number of purposes: it protects the actual soil surface from the direct vagaries of weather, retains soil moisture for an extended period of time thus reducing the need to water, feeds the macro-system and, in time, rebalances soil health thus boosting fertility levels and healthy plant growth. This organic material also interacts with soil particles to encourage them to release vital minerals, these are essential for strong plant growth, that they otherwise keep ‘locked’ inside.

The physical texture of soil is of extreme importance to plants and to the soil macro-system so it is best to completely avoid digging or even walking on wet soil as these actions compact soil texture reducing its ability to breathe.

If you happen to be one of those unfortunate people who has inherited ‘dead soil’ or soil which is, for whatever reasons, on the verge of dying, or are struggling to create a garden where — this is relatively common around newly built homes — the sub-soil has been brought to the surface, the easiest way to have a fertile garden is to buy as much top-soil / sweet earth as is needed to completely cover the sub-soil with, at the bare minimum, 12 to 15 inches of new earth and as much as 30 inches if you can afford it. The less costly alternative is to build raised beds, the depth of these varying according to what you intend to grow, on top of the sub-soil and without disturbing it, and create your garden in these. Designs for raised beds and suitable soil depths for plant types will feature in a separate column soon as will the art of home composting.