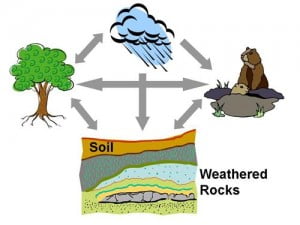 The soil is a natural body, differentiated in to horizons of loose (Unconsolidated) minerals and organic matter of variable depth on the earth crust, that is capable of supporting plant growth. Soil are usually formed by the disintegration and decomposition of rocks and of the vegetation ‘and animal fossils embedded in them. Rocks contain innumerable minerals which on weathering give soil particles in which various organic materials from plant and animal sources get mixed together and form soil usable for agricultural purposes. A soil is three dimensional, transferrable natural material which is found on earth crust and provides natural medium to plant growth. Their properties are due to the persistent actions of climate and constituent living organisms. Soil is formed from rocks in two stages, firstly decomposition of parent material by weathering of rocks, and secondly, the development of soil profile.