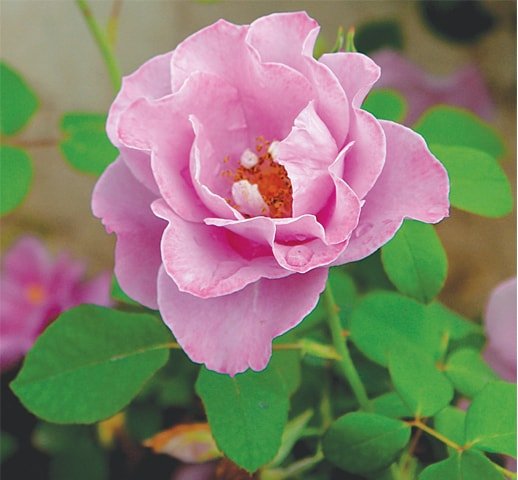 Caring for your roses is a year round task if, as you no doubt do, you want them to grow strong and healthy and reward you with a wonderful, long lasting, display of gorgeous blooms.

Having discussed soil, general growing conditions and pruning in this column two weeks ago, we will now move on and take a look at common pests and diseases and what should be done about them — using organic principles of course.

Scale insects and mealy bugs can, especially during warm, humid periods of the year, be a major issue and depending on how thorough you are in dealing with their eradication, be a recurrent problem.

Roses may be the most popular and beautiful flowering shrubs, but starting a rose garden can be a daunting task

Between four and six generations of scale insects / mealy bugs are usually present at the same time. Adults are visible, often in their thousands, on the actual plants and these are accompanied by their equally hungry, ‘teenage’ offspring whilst ‘hatchlings’ and eggs continue to develop in the soil around the plant and tucked away beneath any fallen leaves, etc. on the plant surface. Eradicating scale insects / mealy bugs on the plants is only a half measure, the ‘hatchlings’ and eggs must be eradicated too. Getting them all dealt with at once is just about impossible; treatment must be continued, at least once a week, for weeks on end if you are to stand a chance of killing them all.

The simplest, purely organic, solution, is to brew up some very strong coffee — from freshly ground coffee beans not the instant variety — allow it to cool, strain it and, in an evening, spray the affected plants, ensuring that underneath the leaves are sprayed as well as the tops and stems, and the soil surface below. Additionally, when done spraying, spread the leftover coffee grounds on the soil around the base of the plants where, especially if regularly topped up, it will keep on working for quite some time. Remove the dead adult / “teenage” scale insects that remain stuck to the plants using a stiff brush, sweeping the dead bodies into a dustpan or something similar and then dispose of them sensibly just in case there is a live one in amongst them and just waiting a chance to lay more eggs! Sap sucking aphids — in the form of green fly, black fly or white fly and spider mites, the latter festoon plants with masses of fine, sticky, cobwebs — can all be problematic but are easily killed off by regular use of either home-made garlic spray or home-made hellfire spray (recipes have been given here on a number of occasions). Washing them off with warm, soapy water is another option.

Leaf-cutting beetles and other leaf-cutting insects such as some ants cut chunks out of leaves but otherwise do no harm so there is absolutely no need to be concerned about them. The same applies to ‘spittle bugs’ which are red and black beetles.

Powdery mildew and downy mildew tend to strike in humid conditions: these mildews flourish in humid conditions, often appearing on plants which are deceptively short of water at their roots. Powdery mildew initially looks as if talcum powder has been sprinkled on plant leaves, whilst down mildew appears as a fuzz. Remove, cutting them off with sharp secateurs, infected leaves and shoots as soon as mildew appears, disposing of them well away from the garden as this is a fungal disease spread by invisible spores. Keep plants watered during dry spells so that they have energy to combat such attacks. Mulching around them to conserve soil moisture is a good idea. Prevention is always better than having to try and cure; also, when planting roses, do not overcrowd them. Good air circulation is essential to prevent / combat mildews and associated fungal diseases. Black spot: black or brown spots appear on the leaves, the area around these spots turns yellow and eventually the whole leaf can wither and die. Remove affected leaves immediately when such a spot appears, picking up any fallen leaves around the plant at the same time. Dispose of them sensibly and not, it must be stressed, on the compost heap! Black spot tends to home in on roses suffering from a nutrient deficiency and those growing in poor soil conditions generally. Preventive measures hinge on soil improvement and regular, organic, feeding of the roses. It is also extremely important to maintain a high standard of garden hygiene around roses if you are unfortunate to reside in a locality where black spot is a known and recognised problem.

It is often claimed that some rose varieties have a built-in resistance to black spot but scientific evidence has shown that while one rose variety may be immune from black spot when grown in one location, this does not necessarily apply when the same variety is cultivated somewhere else.

Care for your roses and, in turn, they will, no doubt about this, reciprocate in the best way they can which, of course, is to fill your garden with their stunning blooms.