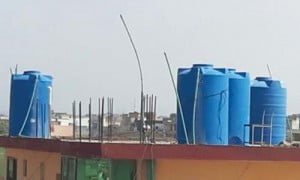 Plastic bottles, containers and water storage tanks are commonly available in different forms in the local markets and are used for the storage of drinking water and food across the country. The annual production of these water storage tanks is increasing and has more than doubled in the last 15 years. These plastic water tanks are generally preferred as they cost less, are made of stronger material, are light-weight and easy to manoeuvre than many other alternatives.

However, lack of awareness and adequate knowledge about the toxicity caused by the plastic and synthetic chemicals used in these tanks has raised serious concerns.

Despite claims by manufacturers regarding their safety, these plastic tanks have more drawbacks than benefits. Plastic water tanks can only be considered a good alternative for ceramic or cement water tanks if they were resistant to heat and Ultraviolet (UV) rays and manufactured from non-toxic material that does not affect the odour and taste of water.

The plastic tanks and bottles available in the market today are mostly manufactured from Polyethylene (PE), Polypropylene (PP), Bisphenol (BPA), High Density Polyethylene (HDPE), Polyethylene Terephthalate (PET) and cross-linked Polyethylene (PEX), or Thermoplastic Polymer, which have very well-known health risks for end users. These chemicals start mixing with water when used for a long time and when these reservoirs are washed with detergents. Leaching also happens when these are exposed to UV rays, high temperature as well as from natural breakdown. When these plastic tanks are exposed to strong heat, especially in the long summer months when the mercury rises above 40oC, the chemicals start to melt down and mix with water. These plastics are also known to alter the physical properties of water despite the manufacturer’s claims that these alterations dissipate with time.

The dissolved chemicals, when ingested by people through drinking water, have many known effects on the human body. For instance, Bisphenol A severely affects the endocrine system and is also known to cause cancer, asthma, cardiac problems and reproductive system irregularities in women. These problems are more prevalent in infants and children than adults. Due to these problems developed countries have banned the use of plastic tanks for drinking water storage.

A recent report by the National Institute of Environmental Health Sciences, USA, states: “Polyethylene Terephthalate (PET) is widely used to make clear plastic bottles for bottled water and other beverages, condiments and cosmetics. There is concern that estrogenic chemicals such as phthalates may leach into the contents from bottles made from PET, although PET is not a phthalate derivative. The contents of the PET bottle, and the temperature at which it is stored, both appear to influence the rate and magnitude of leaching. Endocrine disruptors other than phthalates, specifically antimony, may also contribute to the endocrine-disrupting effect of water from PET containers.” Similarly, according to a study published in the Journal of Water and Health: “In three new PEX pipes, MTBE was detected in concentrations above the recommended US Environment Protection Agency taste and odour value for drinking water, but decreased below this value after five months in service.” They further quote “odour from some of these pipes could negatively affect drinking water for up to one year”.

Bill Brown, an Australian journalist, reported of the research carried out by the Department of Public health, Government of Western Australia that plastic tanks are causing copper poisoning due to the corroding of water pipes attached to these plastic tanks. Rainwater mixes with the drinking water in the tanks left open, and the naturally acidic rainwater then reacts with the copper pipes and that contaminated water moves into the drinking water taps in the households. This issue does not occur with cement tanks, as they leach out lime into the water which ultimately reduces the acidity and corrosion of pipes. Brown observed that dissolved copper initiates gastric problems, and headaches and liver damage. Plastic tanks also affect the biological properties of water where different micro-organisms grow and multiply at a faster rate compared with clay or cement tanks. The growth of different worms is also possible, especially when contaminated with rainwater.

A study published in the journal, Food and Chemical Toxicology, reported that PET bottles used for beverages release potentially toxic compounds like Acetaldehyde, Dimethyl Terephthalate, Terephthalic acid. Empirical work on this theme by a group of chemists working at Salahaddin University, Kurdistan, Iraq noticed the release of carcinogenic compounds into mineral water (natural and carbonated) from Polyethylene Terephthalate (PET) bottles, which indicates a possible introduction of toxic compounds into drinking water. Moreover, sunlight and storage temperature were reported to affect the physicochemical properties of drinking water.

The research points to the fact that the time of exposure and temperature are important factors for the leaching of PET into drinking water. In Pakistan, plastic water containers and bottles are used for a longer time than recommended and are exposed to direct sunlight. The synthetic chemicals make their way into the water bodies and cause toxicity in the aquatic life. Provincial governments, health departments and environmental agencies in Pakistan need to initiate a proactive approach to raise awareness about the dangers of using plastic water tanks to ensure the provision of contamination-free drinking water to society.