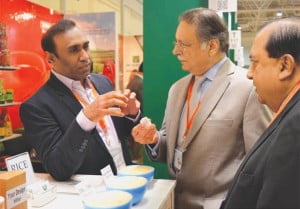 THE relief package announced for the agriculture sector by Prime Minister Nawaz Sharif last week is expected to make a positive but limited impact on food exports. But the key issue is its effective implementation as some of the incentives announced earlier and now included in the package have remained on paper.

At a time when export earnings from food items are showing signs of decline (down 1.4pc to $4.56bn in FY15), the package offers hopes for better performance.The relief is likely to improve squeezed farmer’s incomes, a part of which may be invested in inputs and increasing productivity.

Out of the Rs341bn total package, Rs147bn have been earmarked for providing direct relief to small farmers whereas Rs194bn have been allocated either for making more bank loans available to farmers or to subsidise such loans. If fully implemented, both moves should help in creation of larger exportable surplus of food grains and enhance export competitiveness of seafood, meat and fruits and vegetables etc, exporters say.

Under direct relief of Rs20bn each, rice and cotton farmers cultivating these crops on land up to 12.5acres would get cash support of Rs5,000 per acre. This should help rice exporters procure rice for exports at a lower price and make them competitive with their regional counterparts.

At a time when export earnings from food items are showing signs of decline, the package offers hopes for better performance

But since the relief has been announced at a time when paddy harvesting is in progress, the anticipated benefit would come no sooner than the next year after farmers have got the promised cash support.

However, as rice millers have also been exempted from turnover tax for FY16, this can provide an immediate short-term relief to rice exporters. Since many millers are also rice exporters and, particularly Basmati exporters, the tax exemption can indirectly help Basmati exports that plunged 24pc to $588m in FY15.

The package also promises up to Rs500 per bag reduction in prices of potassium and nitrogen fertilisers through another Rs20bn subsidy. But the government and fertiliser makers are yet to finalise details of the price cut plan.

Even if the plan is finalised soon and farmers start getting subsidised fertilisers, pass-on benefit to millers of rice or sugarcane will take time to materialise because paddy crop is being harvested and cane crop harvesting is only two months away. Naturally, farmers’ cost of production of only that crop would fall that they plant using subsidised fertiliser.

Parts of the agricultural package such as payment of premiums, by the government, on crop insurance obtained by small farmers and distribution of mark-up free loans to them for purchase of solar-powered tubewells can benefit up to 0.7m farmers in cutting cost of production and indirectly supporting food exports.

“But for such moves to benefit food exports, it is crucial that other issues like shortage of irrigation water and cost of farm-to-market transportation are also addressed,” says a Karachi-based exporter of fruits and vegetables.

He says that use of solar-powered tube wells can cut cost of output of vegetables and minor crops including oilseeds and pulses besides boosting their yields. And that can indirectly help exporters of these items, too. But a lot depends on prices of other inputs particularly pesticides which are very costly. Perhaps, a more meaningful incentive is the reduction in sales tax (from 17pc to 7pc) on import of cold chain machinery, not only for exporters of fruits and vegetables but for seafood and dairy and meat exporters as well.

Equally helpful is the extension in retirement deadline of rice millers’ outstanding bank loans of Rs34bn till June 30, 2016. This, too, should help miller-cum-exporters.

Higher sales tax on cold chain machinery was long seen a big hurdle in the way of promoting production of packaged milk and storage of seafood and meat products etc. The relief package also promises a four-year income tax exemption for those Halal Meat processing units that are registered by the end of 2016.

Under the relief package, the energy tariff of electricity-run tube wells has been fixed for small farmers and the federal government has also promised to pay the sales tax part of such bills. The twin measures may reduce the input cost of all major and minor crops.

One big concession offered under the package that can benefit exporters more than anything else is the reduction in customs duty, sales tax and withholding tax on agricultural machinery from 45pc to just 9pc. It would help to increase productivity and will leave larger exportable surplus at hopefully lower rates.

Two other incentives – doubling of production unit—from Rs2,000 to Rs4,000—to augment farmers’ capacity to seek bank loans on collateral and a promised 2pc subsidy on farming loans mark-up rates are general in nature.