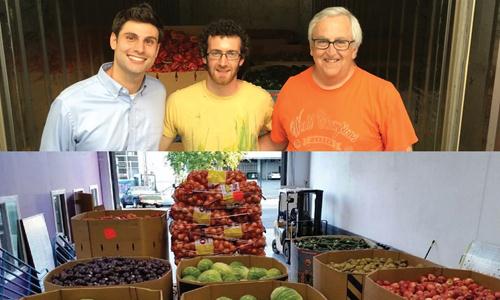 Ron Clark and Ben Simon met at a gleaning event last fall that I coordinated before Feeding the 5000 Oakland. Since then they’ve been working hard to start up an innovative company that is going to change the produce world. And the more you learn about Imperfect, Ben, Ron, and their third business partner Ben Chesler, the more you’re sure to be impressed. Especially now that they’ve officially made history with Raley’s, the first large grocery chain in the U.S. selling misshapen produce. In addition to that, Imperfect just rolled out “ugly” produce home delivery in Northern California as well. And this is just the very beginning to “redefining standards for beauty in produce” as their slogan so aptly claims.

And, to be certain, this isn’t just a small project with some boxes of produce and a dream. They have actually received a significant amount of startup capital with several hundred thousand dollars in seed round funding and that’s just what they accepted from many offers. And rightly so as the Imperfect team is quite impressive. Co-Founders Ben Simon and Ben Chesler are only 25 and 23 years old respectively and already they have founded the very successful Food Recovery Network along with other students. FRN, as it’s known, recovers good surplus food for those in need from over 150 different colleges in the U.S. And they have teamed up with quite possibly the perfect person for this “imperfect” job.

Ron Clark, produce industry veteran and ugly produce expert, was one of the folks responsible for starting the amazing California Association of Food Banks Farm to Family program that now saves 140 million pounds of produce a year. Ron has since worked to source produce seconds to food banks all along the west coast and now he’s venturing out to make this ugly produce available to everyone around the country, no matter who and where you are. And as Ron often says, there is plenty to go around with at least 3 billion pounds of produce going to waste, mostly for cosmetic reasons (that do not affect taste or freshness), in California alone!

So where does Imperfect want to take all of that tasty, nutritious, would-be wasted (for no good reason) produce? Since there is so much ugly produce out there, Imperfect will have plenty of tasty offerings for grocery stores and home delivery. In addition to being able to buy pears, peppers, and plums at Raley’s right now, Imperfect had apples, mini seedless watermelon, onions, pears, peppers, plums and zucchini in its first home deliveries this past Saturday, August 8th. And with approximately 50% of the country’s produce grown in California, there will be plenty of options in the future as there is no shortage of ugly produce out there for the taking.

In addition to their innovative service to the environment by saving produce, Imperfect also has an innovative (and praise-worthy) social component as well. For low-income zip codes and food deserts (of which there are plenty in the San Francisco Bay Area, even with our bounty of growers nearby), Imperfect is going to be offering a reduced-cost delivery service for just $8 for a 10-15 pound box. That same amount of produce would usually cost $20 in a grocery store. This service cannot be understated as food deserts wreak havoc on their community’s diet, making it very difficult to purchase and afford healthy food, including produce, and that’s if you can find it.

Want to learn more about Imperfect and better yet sign up for their produce delivery service in Oakland, Emeryville, and Berkeley, California? Check them out and give them a follow across social media. And for those of you that wish Imperfect was selling in your area, stay tuned as they take their social enterprise to new heights because beautiful things can come from ugly produce.