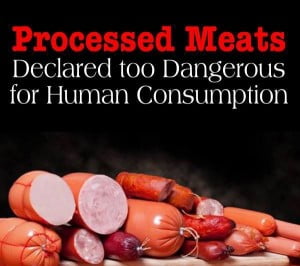 The World Cancer Research Fund recently completed a detailed review of 7,000 clinical studies covering links between diet and cancer. Upon conclusion it is evident that processed meats are dangerous for human consumption and consumers should stop buying and eating processed meats.

What are processed meats?
Processed meats include bacon, sausage, hot dogs, sandwich meat, packaged ham, pepperoni, salami and nearly all meat found in prepared frozen meals. Processed meats are usually manufactured with a carcinogenic (linked to promote and cause cancer) ingredient known as sodium nitrate. Sodium nitrate is primarily used as a colour fixer by meat companies to make the packaged meats look bright red and fresh. Monosodium glutamate is also added on a regular basis to enhance the savoury flavour.

Sodium Nitrate has been strongly linked to the formation of cancer-causing nitrasamines in the human body, leading to a sharp increase in the risk of cancer for those consuming them. A 2005 Hawaii University study found that eating processed meats increased the risk of pancreatic cancer by 67%, whilst another study found that it increased the risk of colorectal cancer by 50%. These are scary numbers for those consuming processed meats on a regular basis.

Monosodium glutamate (MSG) is a second dangerous chemical found in virtually all processed meat products. MSG is a dangerous excitotoxin linked to neurological disorders such as migraine headaches, Alzheimer’s disease, loss of appetite control, obesity and many other serious health conditions. Manufacturers use MSG to add an addictive savory flavor to dead-tasting processed meat products.

…and many more meat products

If it’s so dangerous to consume why are they allowed to sell it?

Unfortunately now days the food industry interests now dominate the actions of the government regulators. The USDA for example tried to ban sodium nitrate in the late 1970′s but were overridden by the meat industry insisting the chemical was ‘safe’. Today the food and agriculture corporations hold tremendous influence over the food industry and as a result consumers have little protection from dangerous chemicals intentionally added to foods, medicines and personal care products.

To avoid the dangers of processed meats:

Vitamin C naturally found in fresh fruits and vegetables has been shown to help prevent the formation of cancer-causing nitrosamines, protecting you from the devastating health effects of processed meats. The best defence of course is to avoid process meats all together