By 2050, it’s expected that the world’s population will reach 9.2 billion people, 34 percent higher than today. Much of this growth will happen in developing countries like Brazil, which has the largest area in the world with arable land for agriculture. To keep up with rising populations and income growth, global food production must increase by 70 percent in order to be able to feed the world.

For IBM researcher and Distinguished Engineer Ulisses Mello and a team of scientists from IBM Research – Brazil, the answer to that daunting challenge lies in real time data gathering and analysis. They are researching how “precision agriculture” techniques and technologies can maximize food production, minimize environmental impact and reduce cost.

“We have the opportunity to make a difference using science and technological innovation to address critical issues that will have profound effect on the lives of billions of people,” said Ulisses.

What is precision agriculture?

Traditionally agriculture is practiced by performing a particular task, such as planting or harvesting, against a predetermined schedule. But by collecting real-time data on weather, soil and air quality, crop maturity and even equipment and labor costs and availability, predictive analytics can be used to make smarter decisions. This is known as precision agriculture.

With precision agriculture, control centers collect and process data in real time to help farmers make the best decisions with regard to planting, fertilizing and harvesting crops. Sensors placed throughout the fields are used to measure temperature and humidity of the soil and surrounding air. In addition, pictures of fields are taken using satellite imagery and robotic drones. The images over time show crop maturity and when coupled with predictive weather modeling showing pinpoint conditions 48 hours in advance, IBM Research is able to build models and simulations that can predict future conditions and help farmers make proactive decisions.

In order to grow crops optimally farmers need to understand how to cultivate those crops in a particular area, taking into account a seed’s resistance to weather and local diseases, and considering the environmental impact of planting that seed. For example, when planting in a field near a river, it’s best to use a seed that requires less fertilizer to help reduce pollution.

Once the seeds have been planted, the decisions made around fertilizing and maintaining the crops are time-sensitive and heavily influenced by the weather. If farmers know they’ll have heavy rain the next day, they may decide not to put down fertilizer since it would get washed away. Knowing whether it’s going to rain or not can also influence when to irrigate fields. With 70 percent of fresh water worldwide used for agriculture, being able to better manage how it’s used will have a huge impact on the world’s fresh water supply.

Weather not only affects how crops grow, but also logistics around harvesting and transportation. When harvesting sugar cane, for example, the soil needs to be dry enough to support the weight of the harvesting equipment. If it’s humid and the soil is wet, the equipment can destroy the crop. By understanding what the weather will be over several days and what fields will be affected, better decisions can be made in advance about which fields workers should be deployed to.

Once the food has been harvested the logistics of harvesting and transporting food to the distribution centers is crucial. A lot of food waste happens during distribution, so it’s important to transport the food at the right temperature and not hold it for longer than needed. Even the weather can affect this; in Brazil, many of the roads are dirt, and heavy rain can cause trucks to get stuck in mud. By knowing where it will rain and which routes may be affected, companies can make better decisions on which routes will be the fastest to transport their food. 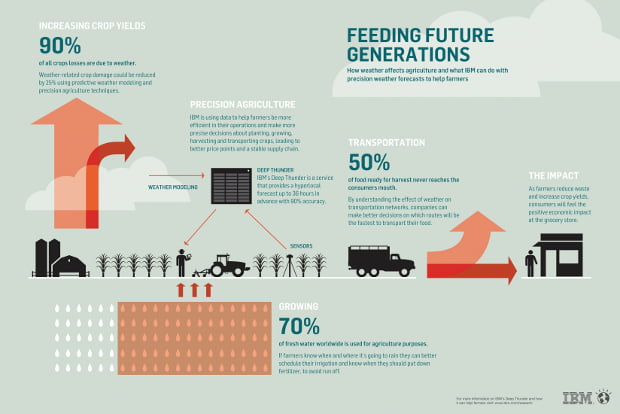 The future of precision agriculture

Currently, precision agriculture technologies are used by larger companies as it requires a robust IT infrastructure and resources to do the monitoring. However, Ulisses envisions a day when smaller farms and co-ops could use mobile devices and crowd sourcing to optimize their own agriculture.

“A farmer could take a picture of a crop with his phone and upload it to a database where an expert could assess the maturity of the crop based on its coloring and other properties. People could provide their own reading on temperature and humidity and be a substitute for sensor data if none is available,” he said.

With growing demands on the world’s food supply chain, it’s crucial to maximize agriculture resources in a sustainable manner. With expertise in high performance supercomputing, computational sciences, and analytics and optimization, IBM Research is uniquely able to understand the complexities of agriculture and develop the right weather forecasts, models and simulations that enable farmers and companies to make the right decisions.