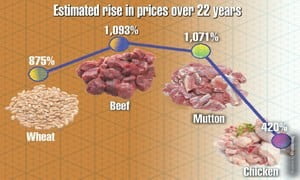 WITH the federal government announcing a Rs341bn rescue package for agriculture, livestock farmers — who now form 56pc of the sector — wonder why they have been deprived of such incentives.

In fact, they were very much part of the protest that built pressure on the government to eventually come up with the compensation package, having spilt milk in front of the parliament building in Islamabad to draw attention to their plight.

The official argument that the huge overlapping between the livestock and crop-farming segments makes distinction between the two almost impossible fails to impress livestock farmers. They insist that livestock is more important for two reasons. First, its contribution to the agricultural economy is 12pc higher than that of the crop sector — 56pc to 44pc.

Secondly, livestock provides a crucial fallback position to crop farmers: if the crops fail, the milk- and meat-yielding animals provide sustainability to the farming families.

In fact, the government has created a policy environment that makes manufacturing milk much cheaper than purchasing and processing it. The import duty regime on whey and skimmed milk powder (SMP) is one example, where Europe is allowed to dump its milk powder in Pakistan.

A complicated web of worldwide subsidies and a low duty regime (around 20pc) in Pakistan have made it easier for the industry to prepare milk rather than purchase it locally. Whenever prices go down in the international market, import increases correspondingly.

These figures show that Pakistan has been converted into a dumping ground for SMP, at the cost of local livestock farmers. This hits small farmers hard and devastates the landless rural dwellers who make around 30pc of the population and are totally dependent upon livestock farming.

This situation has lead towards a slide in livestock farming. The recent ringing of alarm bells by Punjab — which had reported a 40pc drop in its livestock population and banned female slaughtering — also adds to the urgency to take corrective measures.

It was because of these fears that India had slapped a nearly 68pc duty on the import of SMP, and Turkey had taken the lead by 180pc.

Apart from changes in the taxation regime, the government will also be well advised to do away with the artificial capping of milk and meat prices and let the free market determine the rates. This advice, of course, presupposes strict anti-cartelisation measures.

If livestock farmers are to be believed, the actual minimum cost of production of quality beef (under commercial and controlled circumstances) is around Rs338 per kg. It will certainly be much higher for smaller farmers because of the increased risk factor and the smaller number of herds. This is against the officially

notified beef price of Rs250 per kg, which is ensured through law enforcement agencies.

The government needs to consider the case of the poultry sector, which has been largely allowed a free run (with any district-level official prices hardly ever enforced). This has not only brought huge investment into the sector but also reduced its costs.

The poultry industry is among the biggest in the country and provides one of the cheapest sources of protein to the people.

Capping the price of a product also caps the potential of the sector, where both the producers (low prices) and the consumers (low quality) suffer.

It is time for the government to reconsider its livestock policy even if it does not plan to come up with a compensation package for the industry. Confusing an entirely independent sector with the parent sector is a bad economic choice. Livestock farmers are as hard pressed as crop farmers and need official support and a better policy regime, if not direct financial compensation.