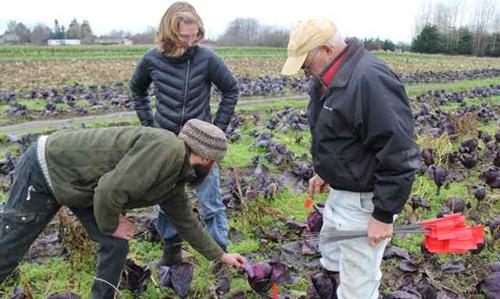 Food Tank recently had the opportunity to talk to Kristina Hubbard of Organic Seed Alliance about their innovative Participatory Plant Breeding program. Organic Seed Alliance is a nonprofit organization that works to advance “the ethical development and stewardship of the genetic resources of agricultural seed.” OSA’s work is focused on developing new, open-pollinated organic seed varieties through a participatory approach that involves farmers in every step of the process. Aside from the development of new varieties, OSA works to advance local, organic seed systems through research, educational initiatives, publications, and advocacy.

Food Tank: What is participatory plant breeding and how does it fit in with the goals of OSA?

Organic Seed Alliance (OSA) advances the ethical development and stewardship of the genetic resources of agricultural seed. We believe seed is part of our common cultural heritage – a living, natural resource that demands careful management to meet food needs now and into the future. Much of our commercial seed is now owned and managed in the hands of a few transnational firms. This control has stifled innovation in plant breeding, and creates barriers to improving the availability, quality, and integrity of organic seed. OSA works to address this consolidation and encourage diversity in our seed systems through collaborative research, education, and advocacy that emphasizes ecology and shared benefits.

Participatory plant breeding is an important part of our work because not only does it help ensure that new varieties are directly meeting farmers’ needs, it also educates and empowers farmers to be part of the breeding process, giving them the tools they need to begin new breeding projects.

FT: PPB programs create networks between farmers, scientists, and other stakeholders. Could you describe the networks that have been formed through OSA’s PPB programs?

KH: One example is the development of newly released variety of organically bred sweet corn called “Who Gets Kissed?” In this project Bill Tracy from the University of Wisconsin-Madison, Minnesota organic farmer Martin Diffley (Gardens of Eagen), and OSA staff John Navazio (our former senior scientist) and Jared Zystro worked together to develop a vigorous, delicious sweet corn that you can save the seed from because it is open-pollinated. As the variety was getting close to release, the network expanded to includeHigh Mowing Organic Seeds and Montana-based sweet corn seed grower Doug Baty, who produced the seed that was then sold commercially through the catalogue of High Mowing Organic Seeds. As this variety continues to evolve and improve, all the people in the network play a role. The variety quickly sold out this year.

FT: From start to finish, how are farmers involved in breeding projects?

KH: The roles that farmers and trained breeders play may vary depending on the specific project and the expertise of the participants. However, farmers may play a role in setting the breeding goals, deciding which varieties to use as parents in new crosses, making crosses, growing and selecting the breeding populations, and releasing new varieties. In many of the best partnerships, the farmers are the experts in knowing what the production and market needs are for a given crop, what are currently the best available varieties, and where the gaps are in what’s available commercially. They often know the best way to grow a breeding population to best match real farm production conditions, and know when to look for key traits.

KH: Information can be shared through emails and phone calls and by sharing reference material. However, most of the best PPB projects include a substantial amount of face-to-face conversation between the participants, both during the planning phases and in the field throughout the season. In many of the best partnerships, the farmers are the experts in knowing what the production and market needs are for a given crop, what are currently the best available varieties, and where the gaps are. They often know the best way to grow a breeding population to best match real farm production conditions, and know when to look for key traits. Formally trained plant breeders can bring expertise in how to set up trials to get the best information from them and how to access varieties or other breeding material that might not be available commercially. Formal breeders also bring expertise in specific techniques such as crossing or disease evaluations.

FT: How does farmer participation lead to better outcomes than a traditional plant breeding program (i.e. one conducted by scientists with little or no farmer input)?

KH: First, including farmers improves the process because the farmers know what priorities they have for a variety (e.g., maturity, disease resistance, yield, flavor, etc.) They know what their markets will accept. They know the specific traits a variety needs to perform in their environment and production system (e.g., specific disease resistance or days to maturity). Second, involving farmers increases the likelihood that the variety will be adopted when it is released since the farmers are already invested in the project.

FT: After a particular breeding program is concluded, how is innovation sustained in farming communities? Have any of the farmers with whom OSA has worked established their own breeding programs or pursued breeding agendas?

KH: First, many projects do not have a definitive conclusion. Breeding is a continual process of improvement and as long as there is interest from the participants, the work can continue. Many PPB projects directly spin off into new efforts. Again, using the ‘Who Gets Kissed?’ sweet corn project as an example, some of the breeding work that was begun in that project has now expanded to include new farmers and breeders working in Washington and California to develop their own open-pollinated sweet corn varieties adapted to those regions. In our PPB projects, we hope that farmers take the skills they learn and apply them to their own independent projects. We’ve seen that happen on multiple occasions. For example, as a result of our work with California farmer Bill Reynolds to breed a vigorous zucchini variety, he was inspired to continue with his own breeding projects, including new winter squash varieties.

KH: First, OSA’s toolkit and our breeding philosophy are largely based off of established PPB projects set up in the developing world. In places such as Syria and Indonesia, farmers have been teaming up with breeders for many years and have had amazing successes. In the U.S., other communities actively using the PPB model include the Farm Breeding Club (a project of the Northern Plains Sustainable Agriculture Society) and Michael Mazourek’s breeding program at Cornell University, where he works closely with regional seed companies and farms, such as the Stone Barns Center in Pocantico Hills, New York. OSA is currently participating in PPB projects that span the Southeast, Pacific Northwest, and California. We have participated in the release of two varieties to the commercial marketplace on account of our PPB work with farmers: ‘Who Gets Kissed?’ sweet corn, as discussed, and ‘Abundant Bloomsdale’ spinach.