Hormones are those products which are specially designed to coordinate the activities of specific cells in certain areas of the body. In living organisms, cells form tissues, and tissues form organs. Different activities occur at each level, and these activities must be coordinated so that the right product is created and transported to the right place in the body. Hormones are those substances which produced naturally in small amount and regulate growth, development and morphogenesis. All living organisms have different growth hormones. Plant hormones are also known as Phytohormone which play important role in plant growth and development. The plant hormones are unlike to animal hormones that are either amine or peptides, produced relatively simple compound like indole etc.

The below figure reveals some of the hormones and their functions 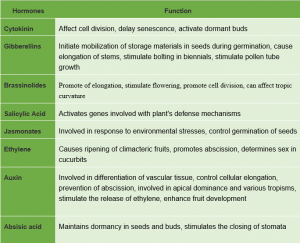 AUXIN: First hormone to be discovered in 1880 by Darwen, went 1926 and kogel 1936. There are different types of auxin occurred naturally but most important is indole acetic acid (IAA). Auxin is similar to animal hormone like melatonin and serotonin. At long distance auxin transported through the phloem vessel. But at shorter distance it is transported directly cell to cell through plasmodesmeta and that path is known as Polar auxin transport. Auxin transported downward which produced by apical buds which inhibit the growth of lateral buds. The shoot tip is major source for auxin supply and arrangement of export carrier at the bottom site of cells. Auxin act as growth stimulator and also show herbicide effects. 2, 4-D Dichlorophenoxy acetic acid show herbicide effects. Which is produced synthetically. When it is applied on wheat crop it will show no harmful effects on wheat crop but kill the broad leaves weeds. AT molecular level auxin present in the form of aromatic ring and carboxylic group. Auxin play important role in the formation of TYPTOPHAN which is not derived from parent plant. Auxin occurred in both free and bound form. Bound form act as precursor. Both form can be extracted from the endosperm of maize and embryo of pea.

GIBBERLLINS: Unlike auxin, gibberellin classified on the bases of function and structure. Gibberellin is synthesis from acetyl CoA. These are named GA1… GAn on the base of order of discovery. The first gibberellin which discovered is GA3. The bioactive GA are GA1, GA3, GA4 and GA7. They are produced in stem, root apical meristem seed embryo and young leaves. Most bioactive GA are found in actively growing plant parts. AT early stage of development GA are active and become inactive on later stages. It permote cell division. Kinin are widely distributed in plant especially in seed. These are produced in plant roots and widely distributed throughout plant parts via xylem. Cytokinin regulate plant growth and became active during all stages of seed germination. IT help to break the seed dormancy.

ABSCISIC ACID: ABA also known as dormin. During development many functions of abscisic acid including bud dormancy. It is a growth inhibiting hormone largely responsible for seed dormancy. ABA is synthesis in fruit. And in maturing seed develop dormancy. It is mobile and readily trans-located from roots to leaves. It will produced in response of environmental stress such as heat stress etc.

ETHYLENE:  It is an important hormone which is widely use in agriculture for ripening of fruits. It act as trace level throughout plant life by regulating fruit ripening ,opening of flower and abscission (shedding) of leaves. Ethylene is produced from essentially all parts of higher plants regulated by developmental and environmental facts. Its production can also induced by external factors such as mechanical injury. Ethylene also induced roots hair growth and increasing the efficiency of water and mineral absorption.

Cytokinin: Cytokines (CK) are a class of plant growth substances that promote cell division. Kinas are widely distributed in plants, especially in seed. They are produced in the roots and transported throughout the plant via the xylem.  It help for cell division and cell enlargement. In addition, they are effective in nodule formation.

All Center of Agricultural Biochemistry and Biotechnology.