Khagal an economical solution for Arid zones of Pakistan.

Since its inception Pakistan has been claimed as an agricultural country which has been true for many reasons. More than two third of country’s population resides in rural areas and are mainly dependent on agriculture for earning their bread. The agriculture sector contributes 24% of GDP and is also the major source of earning foreign exchange. 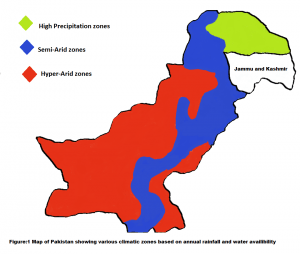 Despite all these claims, the geography of the country is not much supportive for natural vegetation. The statistical survey suggests that 92% of the country falls under semi-arid and hyper-arid zones. This means out of 80 million hectares of agriculturally viable land 75 million hectares shares scanty water problems. The area with high rainfall and river irrigated land comprises only 5 million hectares, as per rest of the area is concerned it requires artificial canals to be built and wells to be dug. With each year inflating underground water tables due to rapid urbanization as well as excessive pumping, many areas of Pakistan are on the verge of turning into barren lands. This creeping desertification could be devastating for the future of an already water stressed country therefore prompt actions needs to be taken in order to avert this situation. The other factor contributing in rapid desertification is disproportionate foresting. Not much work has been done to alter the effects of deforestation resulting due to overnight urbanization. In simple more trees are being cut down every year then replaced by new ones, which in turn is affecting the ecosystem and range management of the country.

One step that could be taken to salvage our already barren lands is to plant drought tolerant trees and shrubs in areas that include major portions of Baluchistan, central and lower Punjab (Thal and Cholistan) and Eastern region of river Indus in Sindh (Thar). Among such plants is Tamarix aphylla called ‘Farash’ in Urdu locally known as Khagal in Southern Punjab and Ghaz in Baluchistan. It is the largest known species of Tamarix. Khagal is an evergreen tree and can be found in many areas across the globe, ranging from Saharan and Sub-Saharan Africa through the Middle East to western and southern parts of Asia, especially in the sub-continent. An average Tamarix aphylla shrub can achieve a height up to 13 m. The reddish brown stem can grow up to 16 inches in diameter and its wood is pretty hard. The leaves are narrow, sharp and pointy covered with sheath and are about 8-10 cm long. Inflorescence is raceme; flowers can be simple or compound, pedicelate, bisexual and appear during summer season. 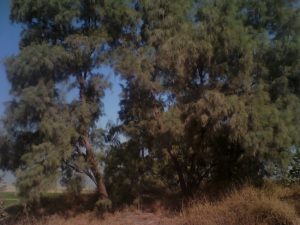 A number of economic benefits can also be associated with Khagal. First of all it is very easy to grow and requires a very low amount of water to flourish. It is an in-expensive plant and can reproduce by seeds or through suckering- mechanisms of vegetative reproduction of a new stem and root from an adventitious bud of a stem or root, either naturally or by human activity. It only requires initial care for 4-5 months till it can develop its root and secondary shoots. It do not require any fertilizer or pesticide investment either. As far as outcome is concerned the average cost of its wood is around 150-180 Rs. per Kg and an average woody plant can yield 1300-1500 Rs. The wood has high commercial value and is basically used in furniture as well as for fuel. However its leaves contains high content of salt and therefore are very hard to burn, this property makes it as a good firebreak tree in forest. Its flower and gals have been used for medicinal purposes from ancient times. Extracts of its bark have been found to provide remedy against skin problems such as eczema. The deep roots of plant protects the land from soil erosion and its shade provide soothing during hot summer days in  a harsh desert climate.

In addition Khagal has very strong regeneration ability and can regain itself to maximum size within years after cropping. The life of tree can prolong for many decades even after being harvested at regular intervals. This makes it an ideal plant for foresting in arid zones and can fulfill range management objectives, resurrecting the extinguishing natural habitat of such areas.

One major drawback of this plant is it secretes very high quantity of salt through the salt glands present in its leaves. This makes the soil in the vicinity infertile for growing any other crop but not for halophytes. These glands actually help the plant survive low moisture content and balance the internal solute level. The same mechanism is also natural defense mechanism against insects and pests. The salts released by Tamarix aphylla include sodium chloride, sodium bicarbonate, magnesium and calcium salts. Although the soil can regain its fertility once plant is removed. In theory, it won’t damage soil as much if its leaf could be removed from the ground but it will require extensive labor too. Hence it would be a bad choice to plant them on rich and fertile ground that has a high crop yield but more profitable on low yielding barren lands. Bottom line, in the wake of increasing desertification and decreasing annual rainfall and underground water tables trees like Khagal can play a vital role in reclaiming our barren land with minimum efforts and maximum gains.

# Khagal an economical solution for Arid zones of Pakistan