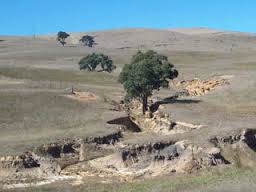 “All things bright and beautiful, all creatures great and small, all things wise and wonderful, the Lord God made them all. The laws and provisions of nature whereby the greatest amount of good is obtained, and by which the animal and vegetable kingdoms are regulated”.

In an era of globalization and industrialization, one of the major challenges faced by our natural environment is its conservation and prevention of any human activity that promotes its degradation.

Land degradation: What is meant by it? Land degradation can be said to be any uncalled for change or alteration in the basic texture of the land as a consequence of man-made processes. It will lead to serious implications on the agricultural productivity which may be visible to us by way of reduction in biomass and a noticeable variation in the composition of the soil nutrients and also the crop production. Land degradation also impacts the natural environment of the Earth through its different forms such as decertification, salinization, silting, aridification, urbanization and soil erosion, as a consequence of which we witness a steep decline in a host of species, which are an indispensable part of our bio-diversity. It also makes our environment susceptible to destruction and damage.

The land’s susceptibility to degrade rests on the twin forces of responsiveness and buoyancy. Responsiveness refers to the extent to which the basic texture of the land can withstand the modifications undertaken as a result of human-facilitated processes or natural calamities. Buoyancy, on the other hand, refers to the adaptability of the land to undergo the change without adversely affecting the bio-diversity and the ecological composition of the landscape. This means that it can regain its original texture after undergoing variations in its composition.

After developing an understanding of what land degradation implies and reading about its consequences in brief, let us move forward and study the causes behind it which also lead to environmental degradation.

Land degradation in recent times has evolved as an area of concern at an international plane. This man- induced phenomenon is attributed to a number of causes, some of which are listed below:

It leads to a substantial reduction in the green cover by cutting down trees, shrublands and woodlands, thus hampering with the natural eco-system of our Earth’s environment. The individuals take to this practice for acquiring fuel wood and timber where there is an acute shortage of timber.

This implies changing the nutrient composition of the soil, in turn, impacting the crop production on the aforesaid land to a great extent.

3. Agricultural methods resorted to by individuals that are uncalled for:

With the population increasing at a rapid pace, the individuals in a rush to obtain good harvest indulge in measures such as cultivating top-most layer of soil or trying to obtain multitude of crops on the soil base not apt for their cultivation.

As a result of human-induced processes, the major part of the arable lands are used as piling grounds for the toxic garbage. These piles of toxic wastes have a detrimental effect on the nutrient blend of soil composition which will badly damage the fertility of the land in question.

The basic constitution of the fertile land is also hampered by grazing on the vegetation cover by the livestock, which will further lead to water and soil erosion.

The low lying regions, specifically in river deltas get flooded by sea water, which makes it next to impossible to carry out the agricultural processes.

Mining is a process through which minerals are extracted by digging the surface of the Earth. This leads to the development of gaps in the land beneath the surface, resulting in the land caving in. This is the effect of the human-induced process on our landscape.

Desertification: It is another variant of land degradation wherein the land becomes extremely dry resulting in cracks and crevices in its surface. These landscapes are devoid of water bodies as well as flora and fauna. Desertification holds great importance when we talk of environmental concerns that need to be addressed promptly. This form of land deterioration is attributable to the natural disasters and also to the man-induced activities.

Now, let us ascertain the causes which lead to desertification. One of the foremost causes is the non-existence of plant life in these arid zones. This loss of green cover can be ascribed to natural calamities together with man-made processes such as land clearance for obtaining fire wood and timber, overgrazing by livestock, drought and also dramatic changes in the weather patterns, among others. Vegetation cover protects the surface of the soil from being blown away by the wind or from being carried away by water, leaving behind the lower layers of the soil which are not very productive with respect to crop harvesting.

Ways of preventing desertification: desertification poses a major threat to the Earth’s eco-system and bio-diversity. Hence, we must adopt measures to curb its impact on our natural environment such as mentioned below:

Reforestation implies endowing the land with lush vegetation cover, which in turn will prevent the degradation of land and soil contamination, as a result of erosion by wind and water.

This method entails digging of trenches in the soil which are about 150 meters in length and 1 meter in depth. These trenches, at an almost level plane as the land inhibits the flow of water inside these trenches, thus preventing erosion.

Interference with the natural ecological and environmental composition poses hazardous consequences to all the living organisms on the Earth, as outlined above. Hence we must ensure that with the increasing stress on industrialization and other areas of development, our natural environment and biodiversity should not be significantly affected.