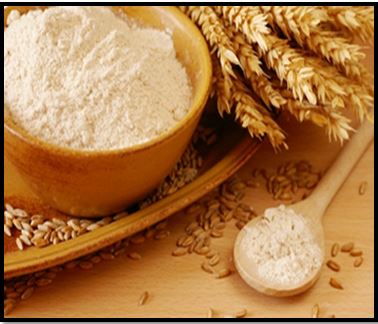 Flour is a finely ground powder prepared from grain or other starchy plant foods and used in baking. The vast majority is made from wheat. Flour has been made since prehistoric times. The earliest methods used for producing flour all involved grinding grain between stones. Many varieties of wheat exist for use in making flour. In general, wheat is either hard (containing 11-18% protein) or soft (containing 8-11% protein). All-purpose flour is made from a blend of soft and hard wheat. Durum wheat is a special variety of hard wheat, which is used to make a kind of flour called Semolina. Semolina is most often used to make pasta. Flour usually contains a small amount of additives.