Biochar is a hard fabric obtained from the carbonization  thermochemical conversion of biomass in an oxygen limited environments.   In more technical terms, biochar is produced by thermal decomposition of organic material (biomass such as wood chips, corn husk, peanut shells, manure or leaves) under limited supply of oxygen (O2), and at relatively low temperatures (<700°C). 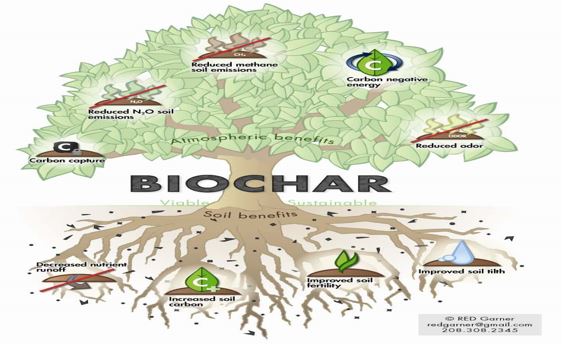 Biochar is found in soils around the world as a result of vegetation fires and historic soil management practices. Intensive study of biochar-rich dark earths in the Amazon (terra preta), has led to a wider appreciation of biochar’s unique properties as a soil enhancer.

Its high carbon content and porous nature retain water, nutrient in the soil and protects soil microbes. It can increase crop yield while acting as a Natural carbon sink keeping carbon in the ground.

Biochar helps conserve plant nutrients by storing them within its matrix and making the nutrients available when the crops need them. This happens because of a property in biochar, certain clays.soil Organicmatter known as cation exchange capacity(CEC).

CEC is a measure of a biochar’s capacity to retain positive ions, such as ammonium and potassium ions, in an exchangeable form that is available to plants. CEC not only helps conserve the fertilizers added to the crop during the growing season, but also improves the soil’s ability to confine and retain nutrients from other sources available at other times . Biochar typically increases cation exchange capacity, and hence retention of NH4+, K+, Ca+, Mg2+.Nitrogen from original biomass, however, may not be readily available.Phosphorous, on the other hand, is generally retained and available. Biochar enhanced sorption of organics (herbicides, pesticides, enzymes).

Biochar can be an important tool to increase food security and cropland diversity in areas with severely depleted soils, scarce organic resources, and inadequate water and chemical fertilizer supplies. Biochar also improves water  quality and quantity by increasing soil retention of nutrients and agrochemicals for plant and crop utilization. More nutrients stay in the soil instead of leaching into groundwater and causing pollution.

Carbon in biochar can persist in soils over long time scales. Beyond the carbon sequestered in the biochar itself, biochar incorporated in soils also offers numerous other potential climate benefits.

Biochar can clean the air in two ways;

How can Biochar be carbon negative.

Fossil fuels are carbon positive; they add more carbon dioxide (CO2) and other greenhouse gasses to the air and thus exacerbate global warming. Ordinary biomass fuels are carbon neutral; the carbon captured in the biomass by photosynthesis would have eventually returned to the atmosphere through natural processes like decomposition. Sustainable biochar systems can be carbon negative by transforming the carbon in biomass into stable carbon structures in biochar which can remain sequestered in soils for hundreds and even thousands of years.

What is Carbon Sequestration

Carbon is found in all living organisms and is the major building block for life on Earth. Carbon exists in many forms, predominately as plant biomass, soil organic matter, and as the gas carbon dioxide (CO2) in the atmosphere and dissolved in seawater. Carbon sequestration is the long term storage of carbon in oceans, soils, vegetation (especially forests), and geologic formations. Although oceans store most of the Earth’s carbon, soils contain approximately 75% of the carbon pool on land — three times more than the amount stored in living plants and animals. Therefore, soils play a major role in maintaining a balanced global carbon cycle.

Slow pyrolysis biochars are highly recalcitrant in soils with half-lives of 100-900 years.Sensitivity analysis suggests that half lives of 80 years or more are sufficient to provide a credible C sink.Recent evidence using 14C-labeled biochar shows no evidence for enhanced rates of soil humic carbon degradation in agricultural soils. 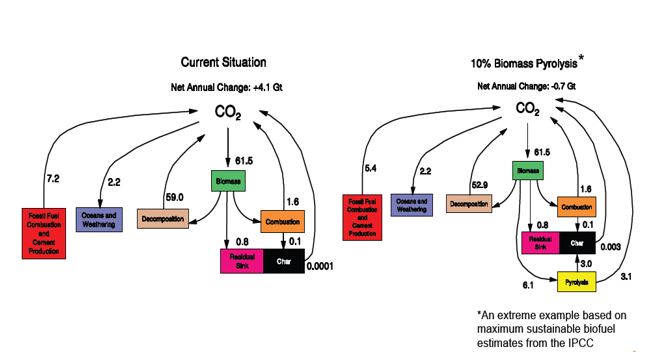 The Biofuel N2O Problem and how biochar avoid this issue