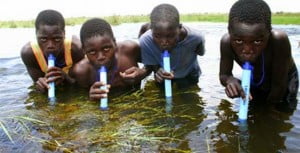 Safe drinking water is especially important for vulnerable groups, such as children under five, pregnant women and people living with HIV. The LifeStraw, a 22 cm-long purification pipe, was originally developed by Danish manufacturers in 2005 as a solution to the devastating problem of unsafe drinking water in lesser developed countries.

Because it is a tool that can save lives, it was named the Best Invention in 2005 by Time Magazine and Invention of the Century by Gizmag. In 2006 it was heralded by the New York Times as a ‘water purifier that could save lives’, and Forbes Magazine also labeled it as ‘one of the ten things that will change the way we live’. The video below demonstrates its practical capabilities. While most people wouldn’t consider drinking from the toilet, it is safe to use in such a location – an example of how marvelous an apparatus the LifeStraw is.

The LifeStraw is a world-changing invention that was initially designed to provide life-sustaining aid during natural disasters. It is also being used in many developing countries where access to sanitary water is limited.

It is capable of filtering at least 1,000 liters of water, and is simple to use. For those in locations where clean water is inaccessible, the invention is life changing. LifeStraw is an astounding water filtration device. It’s small, highly portable, simple to operate, and possibly life-saving. For the rest of the world – unfortunately – the ones need it less, this amazing device will help you outdoors! Keep one with your camping gear, in the glove compartment of your car, and in your pocket anytime you’re hiking in a remote area.