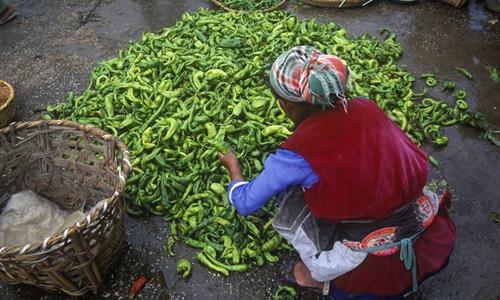 Juanita Chaves Posada, working on behalf of the Global Forum on Agricultural Research (GFAR) is passionate about informing smallholder farmers in developing countries about their rights. The rights she is championing flow from what subsistence farmers have cultivated, protected, and shared for thousands of years – seeds – and our food security depends on them.

The indigenous farmer, who has little access to bigger markets, enables those markets to exist. Without his (or very often her) quiet innovation, adapting the genetic properties of seeds to meet consumer and climate needs, we would not have the choice and quality of food we take for granted.

The good news is that these smallholder farmers can help the world respond to climate change. Indeed, they already are helping. and always have—but in order for their contribution to be effective and timely, two things need to happen. First, the farmers themselves need to be aware of their rights as smallholder farmers and the importance of their role. Second, their rights need to be recognized by others. This is where Juanita Posada and GFAR come in. “Farmers’ rights are human rights, collective human rights,” she says. “They are essential for food security and reducing hunger and poverty. Often the farmers do not realize the importance of their role.”

Breeders’ rights imply that the breeder has control over genetic material, including selling, marketing, importing, exporting, storing, and reproducing the genetic material. The rights of farmers over plant genetic resources for the development of new plant varieties were not recognized by the international community until 2001. TheInternational Treaty on Plant Genetic Resources for Food and Agriculture recognizes farmers’ rights, but the realization of those rights is left to national governments. Often farmers do not know that their country is a signatory to the Treaty, let alone that these rights exist.

When Juanita asked farmers’ organizations in Guatemala what they most needed in order to exercise their rights, the answer was unanimous: they needed information about their rights. Juanita is spearheading GFAR’s efforts to bring that information to both farmers and governments. She has produced six awareness-raising booklets, and drawn up steps that governments could follow to develop national legislation on farmers’ rights. Her next step is to take what she has learned to Honduras, Nicaragua, and Malawi.

“The difference between plant genetic resources and other natural resources is human,” Juanita says. “Without people, the seeds that feed the world would not exist. Because ownership of the genetics nurtured by the smallholder farmer is collective, it is difficult to measure their rights in monetary terms. Yet they are a much-needed source of income.”

The first necessity is communication via a process that is inclusive and participatory. Meetings need to involve all stakeholders – smallholder farmers, public sector decision-makers, and private enterprise investors. International partners like GFAR can be crucial in getting this underway. Smallholder farmers, especially the women farmers who are often the principle holders of traditional knowledge, need to be given a voice.

Third, GFAR and international consultation processes like the Global Conference on Agricultural Research for Development must be venues for the harnessing of political will and action-oriented advice.

Looking forward, might a lead country emerge, help set an example and create a race to the top? Might a strong female figurehead come onto the scene and become a game-changer? Working on behalf of GFAR, Juanita will continue to raise awareness, bridge interests, and demonstrate through practice that we are all actors in the same future.

The Global Forum on Agricultural Research (GFAR) brings together all those working to strengthen and transform agricultural research for development around the world. During 2014 and the International Year of Family Farming (IYFF), GFAR is working with Food Tank to showcase and raise awareness and understanding of the challenges faced by smallholders and help identify efficient ways to support family farmers.