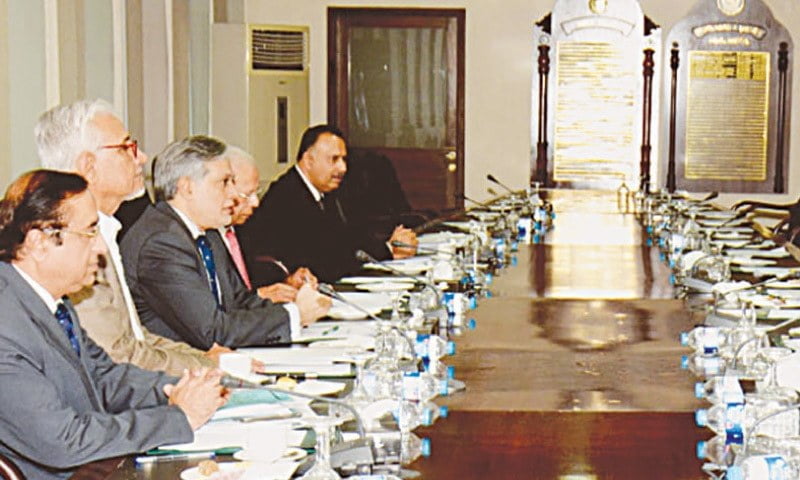 THE frequency, length and severity of the exchange-rate volatility seen in recent years would have been less damaging but for some unscrupulous, politically influential market players.

This is the gist of what central bankers and executives of commercial banks and exchange companies say privately when asked to shed some light on the issue. But they also did not discount several other, more conventional factors for the volatility in the exchange rate.

Unlike during the tenure of the previous government, the external sector is currently not too weak, the State Bank of Pakistan’s (SBP) resolve to deal with currency speculators is intact and in fact has become stronger, and the room for currency speculation has shrunk.

However, more fundamental reasons for the volatility lie somewhere else, like in the conduct of monetary policy, interest-rate management, bank’s excessive lending to the government, and the government’s obsession with a low-inflation regime.

“Besides, however healthy our external account is today (relative to what it was during the PPP era) is dodgy to say the least,” says the treasurer of a leading bank. He argues that forex inflows expected under foreign direct investment have materialised only marginally so far, while export revenues have shrunk and the sustainability of double-digit rises in home remittances is uncertain.

In a recent interview with a local TV channel, SBP Governor Ashraf Mahmood Wathra remarked that he did not know how much of the $46bn Chinese investment will be in the shape of debt, equity and investment.

“Such ambiguities add to misgivings about the external sector’s sustainability and fuels exchange-rate volatility through panic-led forex positioning by market players,” says another senior banker.

Finance Minister Ishaq Dar and the SBP governor recently met forex companies and impressed upon them the need to keeping the exchange rate stable in the open market. From the government’s point of view, a rising dollar and a sinking rupee in the open market create a public fuss and take a toll on its political image.

But from the central bank’s point of view, volatility in the open market is worrisome primarily because it starts affecting rates in the interbank market, if not checked in time. And that has happened many times in the past as well as in the most recent episode of speculation-driven volatility.

“Going beyond that, if the rupee sheds two full percentage points (in the open market) as it did in the latest episode, a more serious threat of dollarisation of money emerges,” says a former central banker.

The arrest of a model on charges of currency smuggling sometime ago had made many currency speculators nervous and they had started liquidating their anonymous accounts with exchange companies, sources in these companies say. This created a shortage of dollars in the open market and the rupee began sliding.

The SBP then sprung into action and the rupee somewhat stabilised after the banks, on the central bank’s advice, generously sold dollars to exchange companies.

But, then, the arrest of a Pakistani money changer in New York on charges of laundering close to Rs200bn led to a further panic-driven closure of anonymous accounts of currency speculators with some unscrupulous exchange companies.

It was at this stage that the FIA and a prime spy agency started investigating the owner of a big Karachi-based exchange company. This served as the proverbial last nail in the coffin, market sources say, adding that all exchange companies then suspended their Hundi operations for the time being.

The central bank, well-aware of the fact that such temporary suspensions of Hundi transactions could lead to a temporary pressure on the rupee — as a big chunk of home remittances still come via this mode — again asked banks to sell dollars to exchange companies at the interbank rate. And it instructed the forex firms to sell these dollars in the open market after charging a modest premium, not exceeding 50 paisas per dollar.

This arrangement worked only partly as the exchange companies continued selling dollars at much higher premiums, in some cases at Rs2.5 per dollar over the interbank rate.

By the time this write-up is published, bankers say the rates are expected to come down to the levels desired by the SBP (i.e. interbank plus 50 paisas per dollar). Already, the difference between the interbank and open market rates has narrowed from Rs2.5 per dollar to Rs1.10-Rs1.20.

But, in the meantime, the rupee has lost some value in the interbank market itself, not only because of fundamental reasons of net forex outflows but also due to panic-driven forward dollar-buying by importers and delayed realisation of export proceeds.