Eutrophication refers to a process in which the addition of nutrients to water bodies, primarily nitrogen and phosphorus, stimulates algal growth. Under natural conditions, this is usually a slow process that results in healthy and productive ecosystems. In recent decades, however, a variety of human activities has greatly accelerated nutrient inputs to estuarine systems, causing excessive growth of algae and leading to degraded environmental conditions. The most common bad effect from eutrophification is high algae growth. If algae take over in a lake or along a river, other forms of life may suffer greatly. Eutrophification generally reduces biodiversity and will specifically and sometimes dramatically reduce the number of certain species. The Great Lakes have severe eutrophification from phosphorus inputs. There are three main stages that make up the essential cycle of eutrophication: oligitrophy, mesotrophy, and eutrophy. These stages represent the lake from its beginning to its death, specifying how old the lake is. When one or more of these stages is sped up or even skipped over completely, the natural balance is disrupted and can result in the annihilation of the body of water.

Oligotrophy is the beginning stage of a lake. The lake is rich in dissolved oxygen, but lacks essential plant nutrients such as nitrogen and phosphorus. This means that the lake also has a lack of fertility that limits animal life in the lake. In its mid-life, the lake becomes mesotrophic. The nutrients, such as decaying organic matter or man made items such as commercial fertilizers, flowing into the lake accumulate in the bottom sediments along with nutrients that settled from decay of the lake’s own organisms. Some of this nourishment recycles into the upper waters where it is photosynthesized into greater production of phytoplankton. The final stage of eutrophication is eutrophy. This stage occurs when the lake becomes old and, despite its old age, its fertility hastens. When the lake’s fertility hastens it increases the supply of nutrients in the water and thus generates lush growth among rooted plants near the shore and between floating plankton. The lake’s water soon becomes turbid with decaying organic matter from plants and animals and the supply of dissolved oxygen in the water becomes depleted by the rapidly growing plants that use all the oxygen they need to live, which is a high majority of it. The absence of oxygen causes anaerobic bacteria to attack organic matter thus releasing hydrogen sulfide. This signifies the end of the lake’s days as the plant life covers up the lake, or bog. Another cycle of a lake’s life, which is as necessary as eutrophication to a lake, is the phosphorus cycle. Runoff of nitrate and phosphate from nearby rock into lakes and ponds produce nutrients for the phytoplankton and the water plants. The fish then eat the phytoplankton and plants, which over time produces a healthy lake or pond. Eutrophication   is one of the most widespread environmental problems of inland waters, and is their unnatural enrichment with two plant nutrients, phosphorus and nitrogen. One important result of lake and reservoir enrichment is increased growth of microscopic floating plants, algae, and the formation of dense mats of larger floating plants such as water hyacinths and Nile cabbage. Growth results from the process of photosynthesis which is how the plants generate organic compounds and biomass through the uptake of nutrients (nitrogen, phosphorus and others) from the soil and water. In the process light acts as the energy source and carbon dioxide dissolved in water as the carbon source. As a result of the photosynthetic process oxygen is also produced. 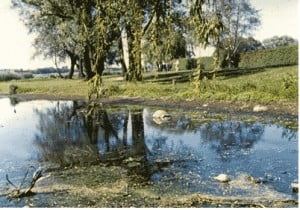 Algal bloom in a lake.

When the plants die they decompose due to bacterial and fungi activity; in the process oxygen is consumed and the nutrients are released together with carbon dioxide and energy. In many lakes and reservoirs in the world plants growing in the surface during spring and summer will die during autumn and sink to the bottom where they decompose. During spring and summer, lakes and reservoirs are often supersaturated with oxygen due to the amount of plants. The oxygen surplus is released to the atmosphere and no longer available to decompose organic matter. This causes oxygen depletion or anoixa in the deeper layers of lakes, particularly in autumn. Oxygen depletion is therefore caused by the shifts in time and space between photosynthesis and decomposition. In tropical areas the same process takes place, but seasonally speaking it is not as representative as in temperate areas because temperature and daylight duration is very similar throughout the year. Some particular type of algae, which grow in highly nutrient enriched lakes and reservoirs (blue-green algae or cyanobacteria, and so-called dinoflagelates which produces red tide,  release in the water very powerful toxins which are poisonous at very low concentrations. Some of the toxins produce negative effects on the liver of life stock at minimal concentrations but they can lead to the death of cattle and other animals even to humans when ingested in drinking water at higher concentrations. Although one way to treat and disinfect surface waters where these algae grow and/or to prevent high concentration of organic matter is to use chlorine, unfortunately this leads to the formation of compounds which may produce or induce cancer -a serious threat to the safety of drinking water supplies. High concentrations of nitrogen in the form of nitrate in water can also cause public health problems. They can inhibit the ability of infants to incorporate oxygen into their blood and so result in a condition called the blue baby syndrome or methemoglobinemia. For this to occur, nitrate levels must be above 10mg per liter in drinking water. The condition can be life-threatening. One of the main problems occurring as a result of algal blooms or other aquatic plants is the reduction in transparency in the water which reduces the recreational value of lakes, particularly for swimming and boating. Water hyacinth and Nile cabbage can cover large areas near the shore and can float into open water spreading at times over the entire surface. These mats can block light to submerged plants and produce large quantities of dead organic matter that can lead to low oxygen concentrations and the emission of unpleasant gases such as methane and hydrogen sulfide due to its decomposition or decay. Masses of these plants can restrict access for fishing or recreational uses of lakes and reservoirs and can block irrigation and navigation channels. 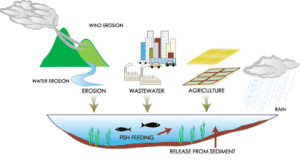 Major sources of nutrients in lakes that cause Eutrophication.

A solution to eutrophication is very necessary because stopping eutrophication is becoming more and more difficult and expensive every year. There is a severe need to educate our children’s and especially our Youngman’s about this threat. We are conserving our lakes and reservoirs from eutrophication with a growing population, growing urbanization and growing industrial production. That is an enormous challenge, it is not an easy task and that end-of- pipe technology is not sufficient. The latter can solve problems associated with industrial and municipal waste water, but it cannot solve all problems, i.e., eliminate all sources of pollutants. That will require specific solutions based on ‘soft’ technology (e.g. construction of wetlands and buffer zones) and involve public awareness and cooperation. Close cooperation with those in agriculture and industry is also important, as they can also reduce pollution significantly, e.g. by application of cleaner technology. Finally, it is essential for success to begin as early as possible, when the first signs of adverse changes appear because prevention is better and cheaper than restoration. In other words, a wide spectrum of methods needs to be applied to solve lake and reservoir pollution problems. 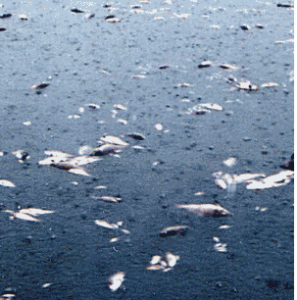 Fish mortality due to lack of oxygen a (Eutrophication)