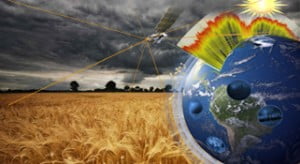 CLIMATE change is an increasing issue of agriculture that has a direct influence on crops yield. By means of 4.5 billion years of world’s creation, its environment has been continually varying; however these changes generally happen on two scales like geological and astronomical and are too slow to observe on a human scale. Climate change is related directly or indirectly to human actions that change the global atmospheric conformation. Pakistan is ranked 28th amongst severely affected countries from climate change. Climate change and crop production are interrelated. It is necessary for a country to make its agriculture sector well organized to foster food security, quality of life, and to support rapid economic growth.

Crop productivity is affected by climate variables like temperature, rain that is in two ways direct and indirect impact. Direct effects comprises plants evapotranspiration rate, soil moisture, plant intake status and plant yield affect its respiration and photosynthesis processes, indirect impact includes plants pest and disease influx processes which are triggered by increased humidity and temperature in atmosphere. Intense temperature results in increased evapotranspiration rate that ultimately leads to high irrigation water demand. Temperature has elevated around 1 ̊C during last periods because of deforestation and fossil fuel burning causing enormous negative effects on crop productivity as well as on environment. Due to climate change, growing season length of wheat will be reduced that have negative effect on yield. The increase in air temperature shortens winter season and the productivity of some Rabi crops will be greatly affected.

It is estimated that there would up to 2.8 ̊C rise maximum while 1.0-2.2 ̊C increase in minimum temperature throughout early and mid-century in rice-wheat cropping system in Punjab. The productivity of these crops is seriously affected. It is likely that there would be increase in growing degree days up to 8% and 15% in 2020 and 2050 with rainfall decrease by 6% and net irrigation water requirements could increase by 29%. There is an increasing trend of maximum temperature (heat) from 2010 to 2014, and afterwards minimum temperature (cold) increases which shows the dynamics of minimum and maximum temperature during five years. In environment alteration, flooding is distinguished symptom that ultimately plans a meeting with disaster and scarcity.

Recurrent floods have been accountable for dribbling trend in Pakistan’s economy as previous few times. Pakistan had challenged two consecutive floods during 2010, 2014, and still in 2015 which lead toward starvation, lack of food, effecting various peoples, and increased scarcity. Tragedy during 2010 involves crop damages like sugarcane, cotton, rice, wheat, pulses .and cattle loss and it also knocked the GDP near 3%. Climate change exposes to dangers of glacial retreats, heat rise, and ocean level rise, more common torrents and droughts. The property of Pakistan is generally arid and semi-arid, probable fluctuations in temperature and rain patterns in the upcoming could close its food security and the wellbeing of lots of its persons.

There is a smaller amount availability of water with the increased needs of irrigation water due to higher evapotranspiration rate at higher temperature We can be part of saving this country by a little participating by awareness about the climate change, by arranging seminars and talks about the climate change in our culture. Meanwhile in Agriculture division, we can overcome the result of climate fluctuations taking measures such as evolving new and inventive farm production practices, progress productivity, changing in cropping arrangement like sugar beet in its place of sugarcane. Altering cropping pattern with water obtainability.

Flood irrigation must be escaped and current imaginative irrigation techniques ought to be assumed like routine use of drip, sprinkler, and ooze scheme in order to overcome the water shortage. We take to manage with climate change situation at local, domestic, and worldwide level over establishing reasonable benefit in farming and agro-based trades.