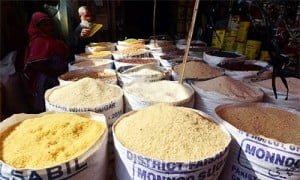 The Economic Coordination Committee (ECC) of the Cabinet approved on Thursday import of 50,000 tonnes of gram pulse to control its prices in the local market.

A meeting of the ECC, presided over by Finance Minister Ishaq Dar, was informed by the Ministry of National Food Security and Research that the prices of gram pulse had more than doubled since 2010 and went up by around 47 per cent since early this year because of lower domestic production.

The ministry had suggested 100,000 tonnes of gram pulse import by the Trading Corporation of Pakistan for sale through the Utility Stores Corporation, but the ECC allowed 50,000 tonnes of import. It said the gram production was declining for the past three years because of unfriendly weather conditions in spring season.

The gram pulse price rose from Rs52 per kg in January 2010 to Rs80 in January this year and Rs115 early this month.

The ECC also approved payment of two-month salary to employees of the Pakistan Steel Mills and Pakistan Machine Tool Factory (both on the active privatisation list) involving Rs1.024 billion.

The meeting was informed that a bailout package of Rs18.5bn had been approved for the PSM on April 24 last year so as to privatise it as a going concern with its turnaround targeted for January this year at 77pc capacity utilisation. But the turnaround could not materialise for several reasons, most of them originating because of government failure to meet its commitments, decline in gas pressures and inability of the PSM to take appropriate business decisions.

In June this year, the ECC considered a revised Rs6.4bn additional restructuring to meet targets of previous plans, but it only approved release of salary for March and April 2015.

Apparently, the government was no more interested in reviving the plant and instead wanted its expedited privatisation as was evident from the fact that another public sector gas company curtailed gas pressure to the plant in June for non-payment of dues and since then the PSM has been on zero production heat mode.

The ECC has now given up considering revival of the plant and decided to keep on paying salary to the staff only until its sale.

The meeting also allowed payment of salary of two months to employees of the PMTF, Karachi.

The ECC approved a summary of the Ministry of Water and Power for adoption and implementation of quality standards for import of solar PV equipment.

The meeting directed the ministry to liaise with the Ministry of Science and Technology and the FBR to ensure a well-coordinated process for the purpose within two weeks and report to it.