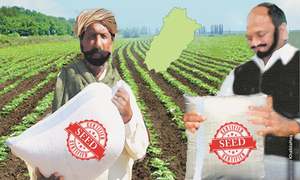 AS the most propitious time for sowing wheat approaches (the fourth week of November), Punjab has undertaken an innovative seed supply and multiplication exercise.

The province will provide a total of 100,000 bags of certified seed to four progressive farmers in each of its 23,800 villages for free. In turn, these farmers will multiply the seed (sufficient for 5m acres) and sell them to other farmers in their area.

Punjab has prepared a database of over 200,000 progressive farmers and plans to provide all of them with free certified seed over the next 10 years, thus replacing the entire seed regime in a decade.

This year, it has spared Rs300m in its budget for the purpose. The exercise will continue until all wheat fields have been sown with the new, healthy and potentially higher-yielding seed.

According to provincial authorities, the new seed has a potential yield of over 80 maunds per acre. If realised, it would be almost three times the current average yield of just under 30 maunds.

This is a long over-due exercise as most of the seeds, even those introduced during the last decade, had fallen prey to all kinds of diseases. These seeds are covering up to 85pc of the current sowing season and have regularly caused big problems for individual farmers. The growers near the border with India have been bemoaning massive rust attacks on their crop during the last few years.

But it remains to be seen if the seed will actual yield three times the crop in the fields, as officials claim it will. How can a new seed, which does not really differ from what the Punjab Seed Corporation has already been selling for years, be different and expected to perform better? The claims regarding the new seed have been made without any scientific or biological explanations.

All the seeds introduced in the last decade have had claims of yielding up to 65 maunds per acre, and some farmers actually went beyond even those levels. But the provincial average increased only by around two-and-a-half maunds per acre — from just over 27 maunds to a little under 30 maunds — in those years.

Without denying the importance of seeds and the need for their regular replacement, one can, with the benefit of hindsight, argue that the problem with Punjab’s low yield has more to do with farm practices than any particular variety of seed.

Even when the province’s average yield hovered around 30 maunds per acre, there were thousands of farmers who reportedly achieved yields of over 75 maunds while using the same seed varieties. Punjab has been giving financial and implement awards to these farmers for their field performances.

But the province needs to undertake an equally massive programme to train growers to help them improve their farming practices.

Such a training component has become absolutely necessary owing to the varying performance of the same seed in the same area. As stated above, growers in adjoining fields achieved different yields because their farming practices varied greatly, in terms of their fertiliser usage, weed control and soil-treatment activities.

Of late, another complicated factor has emerged: climate change. Erratic weather, untimely rains of varying intensity followed by droughts have all made farm practices more complicated and the testing of any seed variety more difficult.

The new seed is being introduced under these circumstances. Whether it has the capacity to withstand the pressure generated by poor farm practices and climate change will be known over the next few years.