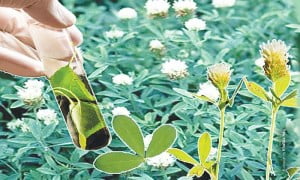 The Parc has developed and tested these two varieties in pilot projects before finding them feasible for large-scale cultivation, officials say. The council will initially provide the seeds of these fodder crops at special rates to those willing to grow them.

Both hybrid varieties were obtained through experiments on the Sorghum Sudan Grass and were accordingly categorised into an existing head of SS hybrid fodder crops.

At a meeting wherein the merits of these and other crops were examined before approval for commercial cultivation, it emerged that the newly developed hybrid fodder crops would likely reduce estimated annual imports of 25,000 tonnes of seeds for these crops.

Sorghum and Sudan Grass are grown widely in Pakistan; the former for both food and feed purposes and the later as fodder alone. One of their hybrid varieties is already being cultivated.

“But the idea of evolving two new SS hybrid fodder varieties gained currency after we found evidence through initial research that they can give higher per-hectare yield and can also be grown even in not-so-friendly climatic conditions,” says a Parc official.

Fresh research on oats has raised the hopes of gaining a per-hectare yield of at least 51-59 tonnes, say NARC officials. This means an at least 15pc increase over the existing yield of the fodder crops of this category

According to the council’s estimates, fodder crops meet about 51pc of the country’s livestock feeding requirements and the remaining 49pc requirement is met through forage and grazing, by products of cereals, post-harvest grazing and oilcake meals and animal proteins. The existing SS hybrid varieties account for about 3-4pc of the overall fodder crop output, the bulk of which comes from Berseem, Sorghum and Guar.

Officials say the total production of all fodder crops has ranged between 55-60m tonnes during the last 10 years, while production in FY14 and FY15 is estimated to have remained on the lower end of this range.

This declining trend is chiefly attributable to shrinkage in the area under cultivation of the crops as farmers switched over to cultivating other, more-profitable crops.

But one major factor has been the inadequate availability of domestic food crop seeds and the increase in the prices of imported seeds. What is more disturbing is that the green-fodder crops thin out in extreme weather, compelling livestock breeders to opt for either costlier animal feeds or keep their cattle under-fed.

The growth in human population in villages, shortage of irrigation water, erratic rainfall and primitive means of growing and storing fodder crops are also affecting their production.

Parc officials say they are coordinating with the provincial agriculture departments to find ways to provide seeds of the two recently developed SS hybrid crops at subsidised rates.

While the total distribution of these seeds would be limited, once farmers get used to cultivating them and obtaining high yields, the growers’ bodies and the provincial agricultural departments may devise a plan to obtain sufficient amount of the new seeds every year.

At the provincial level, researchers at the Fodder Research Institute in Sargodha, Punjab, have been working on boosting the production of both rabi and kharif fodder crops for quite some time.

In addition to the research conducted on main fodder crops, i.e. Berseem, Sorghum and Guar, they have made some progress in developing two oat fodder varieties that they have shared with the National Agricultural Research Centre (NARC) in Islamabad.

Fresh research on oats has raised the hopes of gaining a per-hectare yield of at least 51-59 tonnes, say NARC officials. This means an at least 15pc increase over the existing yield of the fodder crops of this category, they add.

The NARC officials say the research being conducted at the Sargodha institute over the last two years has been helpful even in the case of Berseem, which constitutes more than one-fourth of the country’s overall fodder crops.

The two varieties — Super Berseem and Agaiti Berseem — have been successfully tested under a comprehensive programme run by the institute. These varieties have given average per-hectare yields of up to 83 tonnes, which is far higher than the yield of most of the existing varieties, officials say.

The growers of fodder crops, however, point out that the problems regarding harvesting, storage and transportation of the crops to markets remain unresolved.

In Sindh, these growers normally sell their produce right on the fields to livestock breeders, who arrange for its transportation. Sometimes, the growers have to make supplies at places designated by the buyers.

With the help of the provincial agriculture department, they can set up large, temporary sales points across a district during the harvesting time and get fairer prices for their produce. This will also attract more people to grow fodder crops, officials say.

Similarly, the farmers also realise that the traditional chopping of fodder plants and their staking in open fields or shanty mud-and-straw shades result in higher post-harvest losses. There is a need to promote mechanised reaping of fodder. In rural areas, truckloads of fodder can be seen coming from the fields to roadsides where just one (and old) chopper keeps slicing the fodder leaves for livestock breeders.

Microfinance banks can lease out chopping and bundling machines to farmers so that they can slice fodder and bundle them in a more organised manner.