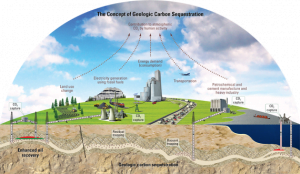 ANTHROPOGENIC ACTIVITIES, especially burning of fossil fuels, such as coal, oil and gas have caused significant increase of CO2 in the atmosphere from about 280 to 380 ppm for last 250 years is one of the main reason causing global warming. Potential adverse effect includes the rise in sea level; a shift in the intensity and frequency of floods, drought, wildfires and storms; changes in the amount, frequency, intensity, time and distribution of rainfall and also disturbance in terrestrial, marine, and other ecosystems. Rise in CO2 level in the atmosphere is increasing adsorption of carbon in the seawater, thus causing the seawater to become more acidic; with the potentially turbulent effect on marine life. Technically and economically suitable strategies are needed to overcome the increase of CO2 in the atmosphere.
To overcome this problem, there are many proposed techniques, one of which is carbon sequestration. It is the phenomenon of capturing CO2 and other forms of carbon from the atmosphere and long term storage in the soil to defer the global warming. This term used to describe all natural and anthropogenic processes by which carbon dioxide is either removed from the atmosphere or diverted from the emission sources and store in the soil as a reservoir. Before the anthropogenic sources of CO2 emission, the natural processes were there that make up the “carbon cycle”. At that time amount of CO2 release and uptake was very balanced but after the Human activities such as burning of fossil fuels, CO2 level started increasing in the atmosphere and CO2 uptake mechanisms are insufficient to capture that increased amount of CO2 and to offset the accelerated pace of emission. We can sequester carbon in three possible ways as, oceanic carbon sequestration, terrestrial carbon sequestration, and geologic carbon sequestration.
About 2 Gigatons of carbon is captured by the oceans annually. The oceans are a permanent sink for the human caused CO2 emission. This uptake is going on through natural processes but not through deliberate sequestration. Atmospheric CO2 is dissolved into the seawater which results in the increase of acidity in the sea water. Marine life mostly depends on the carbon skeletons and sediments that are susceptible to dissolution in acidic water. Research work indicates that CO2 induced acidification may eventually cause the rate of dissolution of carbonate to exceeds its rate of formation in such ecosystems. So this increased level of CO2 may be vulnerable for marine life.
Biological carbon sequestration is also known as terrestrial carbon sequestration. This process is attained through techniques of soil and forest conservation. These techniques are helpful in capturing and storage of atmospheric CO2 in the deep impermeable rocks of the soil. Reforestation is one of the solution to capture CO2 while photosynthesis; in this processes forests assimilate carbon and some of this returned to the atmosphere through respiration. The carbon that remains in the plants as tissues is added to soil after decomposition as litter when plants die. Plats are also consumed by animals. When animals died and their body decomposed some amount of carbon is also added to the soil.
Carbon can be stored in the soil by many ways as biochar and soil organic matter. Biochar can sequester 0.2-1 billion tons of carbon annually. Conservation tillage plays an important role in the carbon sequestration by increasing carbon concentration in the topsoil. Cover crops also meliorate carbon sequestration by improving soil structure and adding up organic matter into the soil. Crop rotation too can sequester carbon in the soil by improving organic matter in top most horizons. This carbon can be stored for a long term depends upon the climatic conditions, soil texture, vegetation and drainage. Biological carbon sequestration can be enhanced through reforestation, by restoring new grasslands, and new wetlands, or suppressing CO2 emission by using chimneys to filter smoke in industries and by reducing tillage practices in agriculture and controlling wild fire.
Geological carbon sequestration is a process of capturing CO2 from the exhaust of industries (fossil fuels), power plants and other sources before it is emitted to the atmosphere and injecting and storage into the appropriate impermeable rock formations present 1-4 km deep into the soil. The most suitable sites for this purpose are non-mineable coal seams, depleted oil and gas reservoirs, and deep saline reservoirs. Geological carbon sequestration can store a very small amount of carbon as compared to terrestrial carbon sequestration. The long term storage of carbon dioxide in this case depends upon the type of mechanism that is used to trap CO2 from anthropogenic sources and its storage in the cap rocks for thousand years.
Carbon sequestration is an important aspect of capturing CO2 to support the world in the fight against global warming. It is necessary to sequester carbon to minimize the rise in temperature. The shift of carbon from atmosphere to soil the will significantly increases the carbon storage in the soil. This will ultimately enhance the soil quality, water purity, minimize soil erosion and also play important role in the water conservation. All these techniques may results to increase crop productivity and profitability. All these properties are contributing to mitigate global warming. Lastly carbon sequestration is the need of the hour. As the world is facing many problems as; floods, storm, heat waves, wild fires, change in the time frequency and distribution of rain fall because of shift in climatic condition. The projects working under carbon sequestration are the source of employment for many researchers and engineers. So we can minimize all these problems by advocating and focusing on its applied ways.
Source