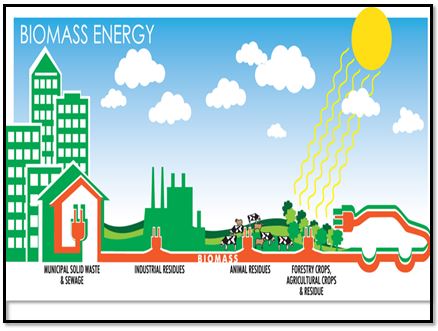 Biomass is organic matter derived from living, or recently living organisms. Biomass can be used as a source of energy and it most often refers to plants or plant-based materials which are not used for food or feed, and are specifically called lignocelluloses biomass .As an energy source, biomass can either be used directly via combustion to produce heat, or indirectly after converting it to various forms of biofuel. Conversion of biomass to biofuel can be achieved by different methods which are broadly classified into: thermal, chemical, and biochemical methods. 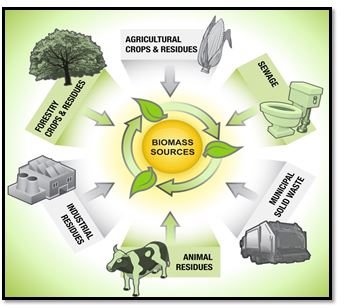 Historically, humans have harnessed biomass-derived energy since the time when people began burning wood to make fire. Even today, biomass is the only source of fuel for domestic use in many developing countries. Biomass is all biologically-produced matter based in carbon, hydrogen and oxygen. The estimated biomass production in the world is 104.9 petagrams of carbon per year, about half in the ocean and half on land.

Wood remains the largest biomass energy source today; examples include forest residues  (such as dead trees, branches and tree stumps), yard clippings, wood chips and even municipal solid waste. Wood energy is derived by using lignocellulosic biomass (second-generation biofuels) as fuel. Harvested wood may be used directly as a fuel or collected from wood waste streams. The largest source of energy from wood is pulping liquor or “black liquor,” a waste product from processes of the pulp, paper and paperboard industry. In the second sense, biomass includes plant or animal matter that can be converted into fibers or other industrial chemicals, including biofuels. Industrial biomass can be grown from numerous types of plants, including miscanthus,  switchgrass, hemp, corn, poplar, willow, sorghum, sugarcane, bamboo, and a variety of tree species, ranging from eucalyptus to oil palm (palm oil). 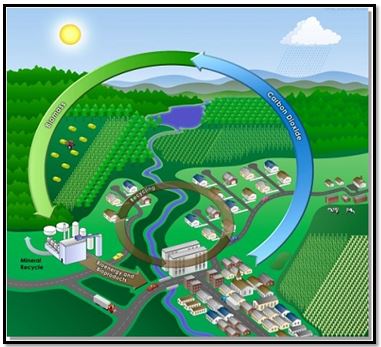 Using biomass as a fuel produces air pollution in the form of carbon monoxide, carbon dioxide, NOx (nitrogen oxides), VOCs (volatile organic compounds), particulates and other pollutants at levels above those from traditional fuel sources such as coal or natural gas in some cases (such as with indoor heating and cooking). Utilization of wood biomass as a fuel can also produce fewer particulate and other pollutants than open burning as seen in wildfires or direct heat applications. Black carbon – a pollutant created by combustion of fossil fuels, biofuels, and biomass – is possibly the second largest contributor to global warming. In 2009 a Swedish study of the giant brown haze that periodically covers large areas in South Asia determined that it had been principally produced by biomass burning, and to a lesser extent by fossil-fuel burning. Researchers measured a significant concentration of 14C, which is associated with recent plant life rather than with fossil fuels.

Biomass power plant size is often driven by biomass availability in close proximity as transport costs of the (bulky) fuel play a key factor in the plant’s economics. It has to be noted, however, that rail and especially shipping on waterways can reduce transport costs significantly, which has led to a global biomass market. To make small plants of 1 MWel economically profitable those power plants have need to be equipped with technology that is able to convert biomass to useful electricity with high efficiency such as ORC technology, a cycle similar to the water steam power process just with an organic working medium. Such small power plants can be found in Europe.

Forest-based biomass has recently come under fire from a number of environmental organizations, including Greenpeace and the Natural Resources Defense Council, for the harmful impacts it can have on forests and the climate. Greenpeace recently released a report entitled “Fuelling a BioMess” which outlines their concerns around forest-based biomass. Because any part of the tree can be burned, the harvesting of trees for energy production encourages Whole-Tree Harvesting, which removes more nutrients and soil cover than regular harvesting, and can be harmful to the long-term health of the forest. In some jurisdictions, forest biomass removal is increasingly involving elements essential to functioning forest ecosystems, including standing trees, naturally disturbed forests and remains of traditional logging operations that were previously left in the forest. Environmental groups also cite recent scientific research which has found that it can take many decades for the carbon released by burning biomass to be recaptured by regrowing trees, and even longer in low productivity areas; furthermore, logging operations may disturb forest soils and cause them to release stored carbon. In light of the pressing need to reduce greenhouse gas emissions in the short term in order to mitigate the effects of climate change, a number of environmental groups are opposing the large-scale use of forest biomass in energy production.