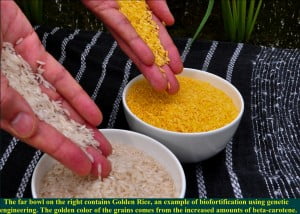 IMPROVEMENT OF nutrient status of staple food crops through plant breeding, agronomic management or genetic engineering is referred as biofortification. This idea is practicing globally due to its promising outcomes and plant breeders are engaged in research pertaining to germplasm bank of those crops cultivars, which have high nutritional value naturally. They crossbreed these varieties with high yielding varieties to introduce seed of higher nutritional value and productivity. Biofortification provides a sustainable and long term strategy for delivering micronutrients.
According to experts, almost 2 billion people are suffering from micronutrient malnutrition globally known as hidden hunger. This malnutrition has adverse effects especially on women and infants. Children born to mothers with vitamin and mineral deficiencies are likely to suffer from these same deficiencies. These micronutrient deficiencies are responsible of major health problems, as for example Iodine deficiency cause goiter, lack of vitamin A leads toward blindness, iron inadequacy cause anemia. According to World Health Organization (WHO), around 250,000 to 50,000 Vitamin A deficient children become blind every year, half of them dying within 12 months of losing their sight. Nutritionists ascribe these diseases due to low intake of milk, fruits and vegetables, lack of universal use iodized salt and poor bioavailability of iron.  Diversification in diet can ensure intake of micronutrients but, poor tend to rely on cheapest available sources such as wheat and rice.  Biofortification of staple crops is a possible way to overcome micronutrient deficiencies.
There are four possible ways a person can get micronutrients, first one is dietary diversity or eating balanced food, second is addition of micronutrients to already consumed food, third is artificial supplementation in which one get vitamins and minerals through tablets and last option is biofortification that is most feasible and sustainable. Biofortification is one solution that can significantly reduce the scourge of micronutrient malnutrition. There is potential to increase micronutrient density of staple foods by breeding. In all crops studied, it is possible to combine the high micronutrient trait with high yield. Through plant breeding, the level of minerals and vitamins in staples can be increased without reducing the crop’s agricultural production levels. This approach has multiple advantages; firstly it capitalizes on regular daily intake of large amounts of food staples for whole family. This strategy totally implicitly low-income house-holds, because, staple food dominant in diets of the poor. Second, after one-time investment to develop seed that fortify themselves, recurrent costs are low. Lastly, once in place, biofortified crop system is highly sustainable.
The development and implementation of biofortification food programs is still in initial stages. HarvestPlus is currently working on research and dissemination of biofortified staple crops. It is an international research program that seeks to reduce micronutrient malnutrition by breeding nutrient dense staple food crops.  It is a part of Consultative Group on International Agricultural Research (CGIAR). This program is mainly working on three micronutrients Fe, Zn and Vitamin A, because, these nutrients considered vital for women and children. They are mainly focusing on seven crops namely; beans, cassava, maize, pearl millet, rice, sweet potatoes and wheat. In HarvestPlus system, traditional breeding methods are used to produce biofortified staple crops. Moreover, different countries have nominated for early release of biofortified crops by HarvestPlus. Sweet potatoes enriched with vitamin A have introduced in Mozambique and Uganda. In Democratic Republic of Congo and Nigeria, Vitamin fortified cassava was available in 2011. In Rwanda iron fortified beans and in India iron rich pearl millet was available in 2012. Wheat and rice enriched with high levels of zinc were offered in India and Bangladesh. Pakistan is also included in HarvestPlus project countries, but unfortunately, none of these fortified staple crops have been introduced in Pakistan till now.
There may be some limitations in adoption of biofortified foods by consumers. For example, foods containing high quantity of vitamin A are dark yellow or orange, which is difficult to adopt by  Africans, because, they use white maize for eating purpose while yellow colored maize is being used by animals. Similarly, sweet potato with white flesh is preferred over orange fleshed. The success of HarvestPlus is dependent on availability of biofortified crops in sustainable manner and incorporation of biofortified crops into existing marketing chains because, new market system development is tough task. Biofortification strategy requires widespread adoption by farmers. Biofortified crops must be incorporated into existing markets or new markets must be developed.  The strategy is to facilitate dissemination and create demand for biofortified crops by linking producers and consumers.
It is well evident from literature and research experiences that biofortification is technically feasible without compromise on productivity. Getting consumers to accept biofortified crops will be a challenge, but with the advent of good seed systems, the development of markets and demand creation, this can become a reality and this will emerge as an agriculture-based strategy that helps to meet the nutritional needs of malnourished communities throughout the world.
Source