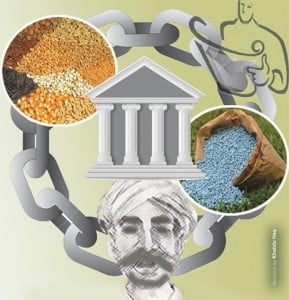 AFTER the launch of agricultural value-chain financing last October, banks have begun using this tool to boost their risk-mitigated lending to the agriculture sector. But the journey seems to be long and arduous.

Right now, the bulk of value-chain financing (VCF) is concentrated in crop-growing and animal farming, as it is easier for banks to identify and classify value-chain partners (VCPs) and commodity or input suppliers who act as guarantors for the farmers.

Under the VCF, banks lend to VCPs or companies that buy the growers’ produce and also to commodity traders and input suppliers, instead of directly lending to farmers. And although banks are encouraged to make long-term loans, they are currently focused on making short-term loans.

Such loans get repaid in instalments as and when the growers sell their crops or when dairy farmers complete their supplying of milk to milk-processing companies. Bankers say these two things are making the VCF attractive for them and this is why commercial and microfinance banks are using it actively.

It is difficult to quantify agricultural loans being offered under the VCF, but bankers boast of a good start in the very first year since the launch of the scheme. And according to the SBP, the VCF was one of several factors that lead to a phenomenal 38pc year-over-year growth in gross agricultural lending in FY15.

Since loans under the VCF are obtained from banks by the VCPs and the commodity or inputs suppliers — who have more financial resources than small growers or dairy farmers — they are more likely to be returned, encouraging banks to increase such lending.

These types of financing arrangements have already been under practice with varying features, depending upon the kind of relationship between a farmer and a trader, input supplier or a marketing company. The VCF has only shown banks how to find a role for them in between.

Many sugar and tobacco mills and a number of companies like Rafhan Maize, Nestle, Engro Foods, Shan Foods, National Foods and Lays etc currently provide inputs and transportation facilities to selected farmers who, in return, sell their respective produce (tobacco, sugar, maize, wheat, rice or potatoes etc) to them. This is an example of marketing company credit. Now, under the VCF, banks are participating in such activities as financiers or co-financiers.

But the VCF is still in its infancy and is facing teething problems. Executives of both commercial and microfinance banks identify a number of problems associated with it.

The process of VCF begins with the sharing of farmers’ status by the value-chain partners and commodity suppliers with the lending banks. Bankers say obtaining the right information about farmers through VCPs or suppliers is not that easy.

“Most of the time they either don’t have credible information about farmers, and at other times they don’t want to share it with banks for one reason or the other,” says a senior executive of a local bank.

“If you seek some information about milk sellers from milk processing companies or about wheat growers from wheat wholesalers, they initially think we’re demanding too many details. And the intensity of such reluctance depends upon the maturity of the VCPs or the commodity suppliers.”

This leads to delays in the due diligence required for sanctioning and disbursing the loans. Even in cases where a loan has been approved and its disbursement has started, lapses on account of mandatory insurance documentation and other such things occur routinely.

According to the VCF’s procedure, it is the VCP that makes payments to commodity suppliers and provides inputs to farmers — both of which are carried out with a bank loan.

Here, the banks’ level of compliance in selecting the VCP plays a decisive role in the success of the entire procedure. If the selected VCP does not meet the full criteria or if the bank has made a value-chain loan to it with minimal due diligence, the commodity suppliers may suffer financially and the farmers would not be able to get the crop inputs or machinery in time.

The VCF scheme also envisages a system for banks to use an arthi, or an intermediary for advancing value-chain loans.

Banks are allowed to use the services of the arthis and to identify genuine borrowers, correctly assess their borrowing needs, ensure proper utilisation of the loans, and facilitate and manage the borrowers’ cash flows by binding them to sell their produce through the arthis.

The VCF scheme is ideal for arthis because they can earn profits by selling the growers’ agricultural produce without lending any money to them (as this job has now taken over by a bank).

“But reputable arthis are not showing much interest in the scheme, particularly in Sindh, whereas those whose credentials are not well-established are eager to do business with us,” laments a senior executive of Habib Bank.