Presently, concept of iatrogenesis and iatrogenic disease has been spread all around the world as an emerging epidemic. Iatrogenic, a Greek word is combined of two words, Iatro and genen where Iatro means “Physician or Doctor” and Genen means “as a result. In 1970, Pacheco Silva, quoted iatron, would be a place where doctors of prehistoric times kept their apparatus, surgical and medical instruments, performed operations, attend their patients, handle their wounds, fractures and strains.

Literally, iatrogenic trauma can be described as, any injury that has been induced by the physician or dentist’s activity. The man of Destiny Napoleon once declaimed allegedly to a physician “I don’t want two diseases- one nature made, one doctor made”. There are many certain factors, responsible for iatrogenic disease development .e.g. including physician error in diagnosis and prognosis, complication in treatments and in test suggestion, dose rate and drugs effects, patient’s nature and his approach to medicine, his socio-economic status or problems within health system. Iatrogenic is very common, frequently preventable, treatment jeopardy and colligated with considerably augmented patient mortality and cost.

In 1994, Dr. Lucian L. Leape in his paper” Error in Medicine” opened the medicine Pandora’s Box, in which he mentioned that one fifth of hospitals patients and 36 % of hospitalized patients become victim of iatrogenic disease while 180,000 lost their lives every year due to iatrogenic injury. Moreover, Dr. Dale (2015) said that in United States of America, more people are dying from the incidents and reactions due to foul medical treatment instead of heart disease or cancer. Different studies have revealed that cholesterol-lowering drugs have pose a threat of homicide or suicide because of decrease in “Serotonin” a brain chemical whose production is cholesterol dependent. It is obviously observed that many times patients take multiple medicines of the same class that may react and lead to iatrogenesis.

Hospitals are considered one of the crucial sources of acquiring infections which are result of contaminated hospital environment (instruments, fluids, food, air and medications), medical personnel’s (carriers of infections, transient colonized) as shown in Figure 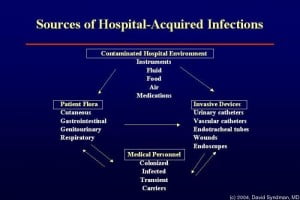 No ‘doubt consequences are very dismay and dreadful that lead to mortality of patients. So it’s time to take some serious initiatives to mitigate the incidence of iatrogenesis. We should start Educational and informational programs not only for medical students but also for public to educate them through mass communication, expert’s opinion, audio-visual documentaries and literatures. The episodes of iatrogenesis must be taken seriously not only in ethical domain but also in legal aspects, so first priority of governing authorities is to make some legislation and establish Iatrogenic Injury Surveillance Unit  to monitor and identify the casual factors behind all iatrogenic injuries through qualitative research orientation, there by taking some steps to tackle this menace of iatrogenic injury. A transparent system having accountability must be developed where medical complaints should be welcomed and disciplinary actions are provoked.