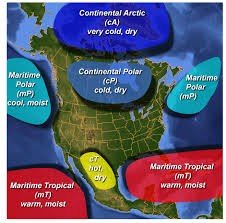 Air masses are the huge body (bubbles) of air whose specific properties of humidity, temperature at any latitude are homogeneous in any direction around the global. The term ‘air mass’ was introduced some 70 years ago by Norwegian meteorologists from Bergen, Norway.

Air are not similar everywhere around the global .It vary according to location, weather conditions can be changed by wind factors, temperature and humidity. There are many factors that controls the weather behavior but air masses is the most important factor.

Main classification based on characteristics and nature of source of region.

Arctic masses occur over the arctic regions like green land and Antarctica.  It is colder with lower dew point. This air mainly forms when high pressure area become over Eastern. Due to solar radiation and continuous emission of earth surface radiation, on abundant surface  of ice the air become colder, temperature reach to -30 to-60 degree,

Arctic air moves into south US.

Polar air masses a little bit farther from the poles, like in Siberia, Canada and the northern Atlantic and Pacific Oceans.

Cold and dry is originating from high latitudes. That brings the dry and clear weather on a     continental polar perfect winter day and also dry and warm weather on a pleasant day in summer. Precipitation is common on the edges of continental polar air, especially where it intersects and displaces maritime polar air. The dew points remain low but the temperature of this air mass increases when moving to south.

Source of origin of maritime polar is the cold ocean. This is also contain low moisture content as maritime polar air. This is notorious to creating fog, drizzle and cloudy weather. Temperature range is freezing- blow 70 degrees. It commonly found in the Pacific; Northwest.

It occurs within about 25 degrees of the equator, and southwest U.S.

This is originating from the desert of Southwest, high plain and Mexico. It contain less amount of dew point and warm to hot temperatures. It usually stables and dry. This create a cap Mila dry air, if this air advents over PBL maritime air, it severe thunderstorm threat increases significantly.

The maritime tropical air mass often found in the Southeast U.S in the summer but in the winter this air shoved toward equator. It is creating by the warm water of Gulf of Mexico. Cold water produces little evaporation as compare to the warm water in atmosphere moisture. Temperature of it 80-90 in summer and 70-80 degree F in winter and dew points always greater than 50.

When maritime tropical moves over the land it start to pick up characteristics of a continental climate.

The air masses found over the land known as continental air masses. It is dry and hot.

For example, a continental Polar air mass originating from the tundra of northern Canada may push southward during the winter. It brings frigid temperatures to the central United States, even as it warms up somewhat on its journey across lower latitudes.

Day to day or short time meteorological condition, precipitation, and temperature are known as weather. A thunderstorm along a frontal boundary is an also weather event.

E.g. readily observable effects of air masses are mostly in the realm of daily weather.

Long time annual interval patterns of those meteorological conditions — the seasonal fluctuations of rainfall in a given region are known as climate.

How air masses changed the weather

Weather can be changed or affected by many factors but air masses is most important factor to controls the weather. We can easily understand about weather changes from air masses by its name .Maritime air masses originate from the Ocean so it produce moist weather. Air passing over the oceans regions, arctic, polar or tropical takes the moisture along with. In maritime arctic and polar regions this contain moist cool air maritime tropical create the warm and humid air.

Continental air masses create dry weather .it doesn’t pass over the oceans. When it meet to moisture then produce dry cold weather in pleasant summer and cold winter. Continental tropical add hot, dry weather in globe like we can see in Southwest U.S.

Weather conditions can be changed by moving the air masses vertically known as convectional lifting .here warm air rising and cool sinking, it caused by high absorption of solar radiation by some spot on earth .Moisture air produce big, fluffy and cumulus cloud on its arising, and when it sinks the whole bunch of cloud dissipates. So weather can be changed just rising or falling the airing globe.

When air masses lifted up over mountains they can also change the weather conditions this way known as orographic lifting. It can be observed the opposite site of mountains. It became cool and expands on rising and this type of cloud produce rain. Falling air become dry from moisture because all water left in cloud.