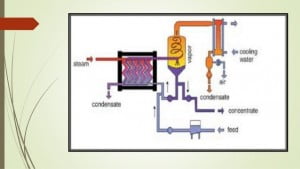 Many fruit juices are extracted, concentrated by vacuum evaporation, and the concentrate frozen on one site, near the growing area. The frozen concentrate is then shipped to several other sites where it is diluted, packaged and sold as chilled fruit juice. Orange juice is the main fruit juice processed in this way. The fruit is graded, washed and the juice extracted using specialist equipment. The juice contains about 12.0% solids at this stage. The extracted juice is then finished. This involves removing bits of peel, pips, pulp and rag from the juice by screening and/or centrifugation. The juice is then concentrated by vacuum evaporation. Many types of evaporator have been used, including high vacuum, low temperature systems. These had relatively long residence times, up to 1 h in some cases. To inactivate enzymes, the juice was pasteurized in plate heat exchangers before being fed to the evaporator. One type of evaporator, in which evaporation took place at temperatures as low as 20 _C, found use for juice concentration. This operated on a heat pump principle. A refrigerant gas condensed in the heating jacket of the calandria, releasing heat, which caused the liquid to evaporate. The liquid refrigerant evaporated in the jacket of the condenser, taking heat from the water vapour, causing it to condense.

Modern evaporators for fruit juice concentration, work on a high temperature, short time (HTST) principle. They are multiple-effect systems, comprised of up to seven falling film or plate evaporators. The temperatures reached are high enough to inactivate enzymes, but the short residence times limit undesirable changes in the product. They are operated with forward flow or mixed flow feeding patterns. Some designs of this type of evaporator are known as thermally accelerated short time or TASTE evaporators.

Volatile compounds, which contribute to the odour and flavour of fruit juices, are lost during vacuum evaporation, resulting in a concentrate with poor organoleptic qualities. It is common practice to recover these volatiles and add them back to the concentrate. Volatiles may be stripped from the juice, prior to evaporation, by distillation under vacuum. However, the most widely used method is to recover these volatiles after partial evaporation of the water. The vapours from the first effect of a multiple-effect evaporation system consist of water vapour and volatiles. When these vapours enter the heating jacket of the second effect, the water vapour condenses first and the volatiles are taken from the jacket and passed through a distillation column, where the remaining water is separated off and the volatiles are concentrated.

Orange juice is usually concentrated up to 65% solids, filled into drums or ‘bag in box’ containers and frozen in blast freezers. Unfrozen concentrated juice may also be transported in bulk in refrigerated tankers or ships’ holds. Sulphur dioxide may be used as a preservative. Concentrated orange juice may be UHT treated and aseptically filled into ‘bag in box’ containers or drums. These concentrates may be diluted back to 12% solids, packed into cartons or bottles and sold as chilled orange juice. They may also be used in the production of squashes, other soft and alcoholic drinks, jellies and many other such products. 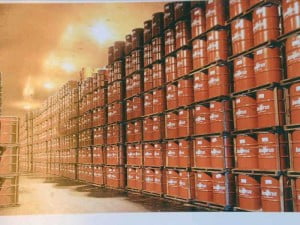 A frozen concentrated orange juice may also be marketed as a consumer product. This usually has 42–45% solids and is made by adding fresh juice, cutback juice, to the 65% solids concentrate, together with some recovered volatiles. This is filled into cans and frozen. Concentrate containing 65% solids, with or without added sweetener, may be pasteurized and hot-filled into cans, which are rapidly cooled. This is sold as a chilled product. UHT treated concentrate may also be aseptically filled into cans or cartons for sale to the consumer from the ambient shelf. Juices from other fruits, including other citrus fruits, pineapples, apples, grapes, blackcurrants and cranberries, may be concentrated. The procedures are similar to those used in the production of concentrated orange juice. When clear concentrates are being produced, enzymes are used to precipitate pectins, which are then separated from the juice. 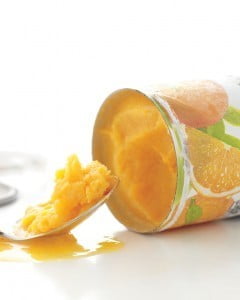 Vacuum evaporation is also applied to the production of concentrated tomato products. Tomatoes are chopped and/or crushed and subjected to heat treatment, which may be the hot break or cold break process. Skin and seeds are removed and the juice extracted in a cyclone separator. The juice is then concentrated by vacuum evaporation.

For small-scale production, vacuum pans may be employed. For larger throughputs, two- or three-effect tubular or plate evaporators may be used. If highly concentrated pastes are being produced, agitated thin film evaporators may be used as finishers. Glucose syrup, skimmed milk and whey are among other food liquids that may be concentrated, to reduce weight and bulk, and so reduce transport and storage costs.

The Author is final year student of