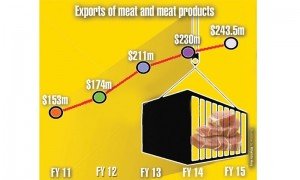 The meat processing sector, which has been doing reasonably well for some years, is set to grow faster after the four-year tax holiday granted for new entrants.

The meat processing facilities, which come up by December this year, and obtain ‘Halal certificates’, will be eligible for tax holiday. Besides the incentive, the improved law and order situation in Sindh, the promises of better power and gas supply in Punjab, rising local and foreign demand for processed meat and stable interest rate environment may help in attracting new companies into this business.

But since the proposed Pakistan Halal Authority is yet to be established, the tax concession should be extended to get desired results, industry sources say.

The domestic market for processed meat has made a visible progress during the past decade and exports of meat and meat preparations have also increased rapidly. From about $40-90m per-year during 2000-2005, meat exports have grown rapidly and fetched $240m in FY15.

Modernisation of dairy and meat sector that picked up in mid-2000s is in progress chiefly fuelled by local investment and policy support and recently Al-Shaheer Corporation, a market leader in processed meat retailing and exports has moved to raise capital from the stock market.

This may encourage other companies to go public. Similarly, proposed establishment of Fauji Meat Ltd, a subsidiary of Fauji Fertiliser Bin Qasim Ltd., with its ambitious plans to produce 100 tonnes of meat per day (85 tonnes beef and 15 tonnes mutton), is expected to boost both local sales and exports of processed meat.

In the local market, the sales of processed raw meat and meat products are growing on the back of rising population, urbanisation, change in life-styles, expanding networks of superstores etc.

Meat One and Khas Meat brands of meat loafs and cuts, meat slices, mutton chops and beef and mutton Qeema can easily be found not only at their own outlets but at superstores in major cities. Sales of ready-to-cook meat products of spices and food companies have also been rising rapidly.

Executives of meat processing companies say that roadside eateries, motels and eating places that remain open throughout the night are among some of the under-served segments of branded meat. With some marketing effort, branded raw meat products can be introduced there.

As for exports, two key developments have taken place that may facilitate exports of meat and meat products. The proposed Pakistan Halal Authority would make obtaining of Halal certificates easier, thereby cutting expenses of exporters who get such certificates from abroad. And, moves to enhance trade with Central Asian countries would open up new export markets.

The proposed lifting of economic sanctions on Iran has already excited exporters about selling their products there. And, despite the fact that Iran itself has a large market of processed meat, chances for selling ready-to-cook meat products in that country are stated to be bright.

However, two things are keeping processed meat business from exploiting its full potential, industry sources say. Investment in this sector is done mostly by major players and medium-sized entrepreneurs are not showing much interest simply because the required initial investment runs into tens of millions of rupees.

Acquisition of land for setting up abattoir, installation of modern machines for animal slaughtering and establishment of chilling and freezing plants for meat preservation all require big investment.

And, medium-sized businesses fear that recovering the cost of this investment can take too long for they would be competing with industry giants that have acquired the economy of scales. Secondly, whereas rearing of animals at meat companies’ own farms is costly, getting of healthy animals from regular animal breeders is also difficult because not all of them have facilities to produce best breed of animals at affordable rates.

Focused efforts to raise production of meat by providing an enabling environment to animal breeders, on the one hand, and incentives for setting up meat processing units like provision of abattoirs and machinery on concessional lease can help overcome these issues, say industry sources.

This would encourage some of those who are operating slaughterhouses in the open fields and supplying meat through a well-established traditional supply chain to venture into meat processing business.