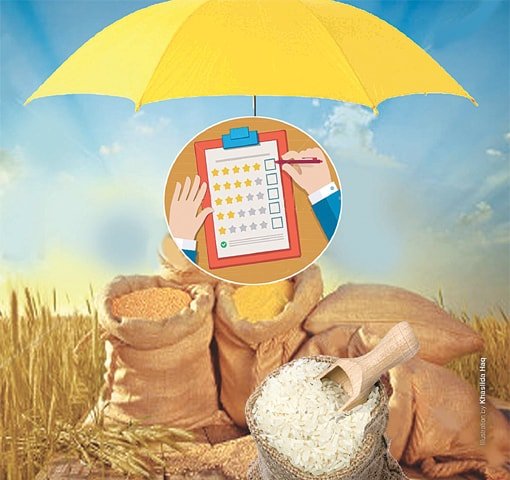 THE federal government has decided to launch a countrywide survey to locate gaps in food security and determine the nature of these gaps.

Food security minister Sikandar Hayat Bosan says all is set for the launch of the survey, which will help the authorities collect a new and more reliable set of data on the net availability of food crops and grains.

“The survey will cover all aspects of food security, including the availability, accessibility and affordability of food crops, as well as details about the nutrition situation,” he had told a conference held earlier this month in Islamabad.

Pakistan has little to worry about food availability because the production of food grains is in surplus — as reflected by the regular export of rice and occasional export of other food grains. But problems persist in the areas of accessibility, affordability and nutrition.

The survey will cover all aspects of food security, including the availability, accessibility and affordability of food crops

“In the area of accessibility, we need to determine the supply and distribution blockades or the disruptions that are making it difficult for people to have access to food,” says an official who is working on the proposed survey’s format.

“In the area of affordability, we will determine how far we can blame the income gap and inflation for those whose food intake is below the required levels. Finally, through datasets on nutrition, we will analyse and try to see where our food grains are lacking in providing the right nutritional value and where other factors come into play.”

“In Pakistan’s case, the problems lie in both the physical and economic access to food. “Pre- and post-harvest losses of food crops, vegetables and fruits (ranging between 15-40pc), ill-timed government interventions to secure adequate food stocks, faulty implementation of competition laws that fail to check hoarding and other malpractices, and a dilapidated farm-to-market physical infrastructure all have an adverse impact on the physical access to food,” says a former food ministry secretary.

“As for economic access, slow economic growth over the past 7-8 years, coupled with high inflation between FY09 and FY13 and income distributional gaps between urban and rural areas and within various income groups, continue to hamper the extending of food security to all.”

Qualitative data gathering is the first step in gaining a deeper understanding of food-security issues. For years, the authorities have been presenting official data on the livestock sector by using statistical modelling on a census that was carried out in the 1990s. The Punjab government only recently realised this folly and banned the slaughtering of female animals.

So a renewed drive for ensuring long-term national food security has been designed keeping in view the need for a physical census of livestock, as well as field surveys to examine all related issues — including input costs, yields and total production, officials say.

The purpose of the exercise is to make sure that the projections made for the near future turn out to be as accurate as humanly possible, they add.

It would be naïve to assume that Pakistan — with a population growth rate of nearly 2pc and given its vulnerability to rapid climate change — can maintain its food surplus status for long.

“Except for rice, we already saw shortages of food crops like wheat and maize in the not-too-distant past. So once we have a new set of data on verified yield gaps, we will have to work upon that to ensure that we have sufficient food stocks to feed the nation and to export the surplus,” says an official of the Punjab agriculture department.

He adds that this is where the ongoing efforts to develop new seed varieties and proper mass storage facilities will matter, referring to the recent release of new high-yield varieties of wheat.

“A crucial issue related to food security is maintaining the right balance between the local consumption of food items and their exports,” a Planning Commission official told this writer.

“Regardless of whether this balance should be in favour of local consumption or exports, depending upon the need of the hour, insightful policymaking and strict implementation is required,” he remarks.

How lapses in this area take a toll is evident from the fact that towards the end of 2015, “provincial food departments are sitting on huge stocks of wheat piled on from the last three years. These were unnecessarily stocked at the time and their exports were disallowed, and they are now being disposed off to millers at cheap rates”.

Geographic disparity in the production of food crops is another matter of concern with regards to food availability. The cultivation of food crops centres around particular districts of a province, creating the need for improving distribution networks.

Tackling these geographic disparities becomes all the more necessary when a province like Balochistan is able to barely cultivate (if at all) adequate quantities of staple crops like wheat to feed its own people. And the issue assumes even greater importance when it comes to ensuring food security at times of natural disasters in the absence of enough food stock at provincial levels.

This and many other similar issues are going to be addressed once the proposed national food security survey is completed and the food security policy is re-written in the light of the results, officials say.