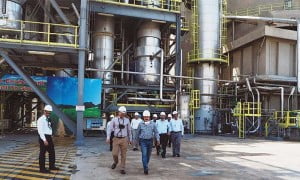 WITH the government having raised feed-gas prices for the fertiliser industry from September 1, the impact is already visible in the market. One of the manufacturers immediately raised its prices by Rs160 per bag and the others are likely to follow suit.

If the Rs160 figure is taken as a benchmark, the farmers would pay an additional amount of Rs880m on the 5.5m bags that they normally consume annually. The figure is staggering, given the dire financial strait that the farmers find themselves in these days.

The official decision is unfortunate for three reasons: its timing, its financial impact on farmers, and the quantum and nature of the spread of the financial benefits.

The timing of the hike could not have been worse. The farming community has been protesting against their rising cost of inputs and decreasing prices of outputs over the last five months, which has made their lives harder than ever before.

The decision is unfortunate for three reasons: its timing, its financial impact on farmers and the quantum and nature of the spread of financial benefits

They took to the streets six times during these past five months and each time the government conceded to the validity of their arguments and came up with incentive packages to address them and persuaded the protesting growers to disperse.

In August alone, the Pakistan Kissan Ittehad picketed for three days in front of the Punjab Assembly and forced the chief minister to assure them that their grievances will be redressed.

With relief packages still being hammered out at the ministerial and official committee levels, the government has increased gas prices for the industry, which, in turn, was quick to pass it on to the farmers — thus increasing the price of one of the most vital inputs, fertiliser. This decision only eats into the political credibility of the government and limits its options in dealing with farmers in the future.

The timing is also bad because the wheat-sowing season is just around the corner and the required urea application is just two months down the line. The farmers would thus pay the cost upfront.

One of major complaints of the farmers has been the rising cost of inputs, particularly fertiliser. With urea prices going up by around 10pc in one go, their choice is a difficult one: either reduce the usage of urea and compromise on yields, or continue using urea at higher prices to maintain yields.

The increase, though announced in June, still looks like it was taken without proper investigation and a study of its ramifications.

The second question concerns the fact that some manufacturing units have their gas prices locked for 10 years. So would they also be allowed to increase their prices? If their decision-makers are to be believed, they would do so shortly. But on what grounds? They need to clarify, or the government needs to look into the matter.

The third question mark is on the impact of the increase. All units have different production and efficiency levels, so how can the impact of the hike be the same for everyone? Here, the receding writ of the government would surely benefit the industry. The plant taking the biggest hit would increase the price by the maximum amount and the rest of the industry will then follow it in the name of avoiding market distortion. The cumulative cost of all this will be borne by the farmers.

The latest hike has taken the price of urea close to Rs2,000 per bag, which is Rs50 more than what imported urea costs at the Karachi port. Only freight charges for upcountry have to be added to the tally. Any slide in international prices from their current level of just under $300 per tonne will make the imported cheaper and hit the local industry hard.