Irrigation water, before reaching a farmers field is transmitted through different modes of distribution. Upon diversion from head works or dams, the water flows through the main canal, branch/distributaries’ canal, and minor into the watercourse through the outlet or mogha. From here the farmers deliver it to the fields head for application. In early seventies, research studies were conducted by WAPDA in collaboration with CSU-USAID and it was established that since the canal systems were technically built, therefore comparatively less loss occur in the canals than in the watercourses. These tertiary watercourses below the mogha were originally built by the water users or farmers themselves, resulting in a huge watercourses network, covering a very large command area. Due to this increased surface area of watercourses, tremendous water losses occur, contributing towards reduced water supply on one hand and the menace of salinity and water logging on the other.

It is estimated that more than 50 % of the irrigation water is lost in the delivery phase and during application within the field.

In the delivery system, this water is lost through seepage from the kacha beds and banks of the watercourses, over topping due to weak banks, trees and bushes, and sedimentation due to variable flows.

Similarly, water is lost within the field during application due to undulations, thereby resulting in over irrigation or under irrigation.

After realizing the huge wastage of water, OFWM pilot project was initiated during 1976-77 with the assistance of USAID.  The project started renovation of watercourses, land leveling and development of farmers’ fields.  Implementation of the USAID program created a desire among the farming community for improvement of the watercourses and land leveling after realizing its benefits. The success of this program encouraged other donor agencies to come forward and fund similar projects. OFWM has now been extended to different parts of the province including non-irrigated areas. In order to translate saved water into an increased production, an important component of OFWM, Irrigation Agronomy, the Field Staff extends new ideas to the farmers regarding Agronomy and Irrigation practices through establishing farm demonstration centers under the command area of renovated water courses.

The main objectives of On-Farm Water Management program are as under:- 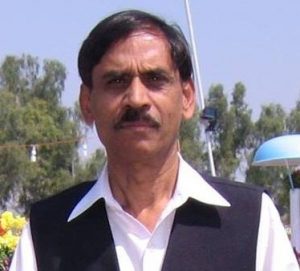