Reasons of poverty: In Pakistan

Poverty is widespread in Pakistan and is particularly predominant in rural areas. Nearly two thirds of the population, and 80 per cent of the country’s poor people, live in rural parts of the country. Poverty ratio in the country is rapidly rising due to sharp increase in inflation and reduction in subsidies, and as per World Bank, poverty has reached at 36.1 percent with 2.3 percent increase, which reflects that around 62 million Pakistanis have fallen below poverty line, the State Bank of Pakistan has stated in its annual report. The SBP said, with many other developing economies, Pakistan’s economy had also faced a wide range of socio-economic challenges and despite government’s commitment, a number of factors, including limited fiscal space, inadequate infrastructure, institutional governance issues, etc, slowed the progress of initiatives undertaken for the social uplift of people.

Thus, a review of socio-economic indicators of the country showed that there had been a marginal improvement in health, education, and employment indicators, while poverty in the country was expected to have risen, during FY09. According to the UNDP Annual Report 2007-08 Pakistan’s Human Development Index (HDI) ranking had declined from 136 to 139 among 179 countries.

The biggest reasons for poverty in Pakistan are:

Pakistan is an agricultural country. Most of people are farmers by profession. One has land which is fulfilling the needs of his family but he has to divide the land into his children when they got young. After division the land is not sufficient to support a family. Now the families of his children are suffering and spending their lives below poverty line.

The reason for poverty is the unfair distribution of income among people. The poor are becoming poorer and the rich becoming richer. In Ayub’s era there were 22 families, who had control of the majority of the national income. In the present, the situation is the same with a slight difference. Such unequal distribution of income is creating restlessness among the less income class. They have less money to fulfill their basic needs like food, health, education and housing etc, that’s why the poverty level is growing day by day. In fact, the non-adoption of Islamic economic system and the capitalistic system are responsible for such an unfair division of wealth.

The reason for poverty is the rapidly growing population of the country. Population-wise Pakistan is the 6th largest country in the world and its population growth rate is 1.8%, which is the highest in the region. Pakistan’s GDP growth rate is less than 3%.

So, there is a shortage of goods and services like food, clothing, housing facilities, education and health etc all these things are inadequate to meet the necessities of a growing population. One earning hand has to feed a large number of family members. Due to the high level of demand and less production, there is general poverty.

The inflation rate as measured by the changes in Consumer Price Index (CPI) stood at 14.1 percent during (July-April) of the current fiscal year 2010-11, as against 11.5 percent in the comparable period of last year. The food inflation is estimated at 18.4 percent and non-food 10.4 percent, against 12.0 percent and 11.0 percent in the corresponding period of last year. The increase in inflation rate during the current year 2010-11 is attributable to the increase in food price inflation which has been mainly due to increase in prices of sugar, milk, poultry, meat, fresh vegetables and fruits owing to shortfall in production of these items and significant increase in world food stuff prices.

Due to industrial backwardness, our exports are less; rather we have to import electrical and industrial items at high rates. A huge portion of foreign exchange reserves in consumed for industrial imports. The low level of living and poverty is related to the backwardness of this sector directly of indirectly.

The reason for poverty is the low level of education and the defective education system. The overall literacy rate (10 years & above) which was 57.4 percent in 2008-09 has increased to 57.7 percent in 2009-10, indicating 0.5  percent increase over the same period last year. 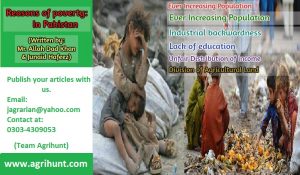