Climate change is a global issue and agriculture sector is its main target. Pakistan stands among the extremely affected countries by the fluctuation of climate. Food security and water availability would be badly affected due to unpredictable rainfall patterns, weather trends, and extreme events such as floods which have been besetting our agriculture sector gravely. Climate change experts warned Pakistan due to the existence of five major hazards related to climate change. There will be glacial retreats, floods, and an increase in sea level, average temperature and in oftenness of droughts. There could be worse situations than recent famine in Thar and other district of Sindh province. Due to the severe fluctuations in climate, it is estimated that by 2030, crop yield per unit area will decrease to greater extent in many regions of the country. Unfortunately, this phenomenon is seen as a global prospect and policy makers in Pakistan have not been to formulate any concrete policy.

Current and expected future climatic scenarios have many hazards for agriculture sector of Pakistan. The late onset and early ending of winter season seems to have reduced the length of the growing season for Rabi crops like wheat and grams. The rise in winter temperature is causing the forced early maturity of grains and economic yield reduction. Monsoon rains will have much higher intensity than normal pattern as we can see previous rain pattern.  Droughts and floods are predicted in Pakistan during the past few years; clearly indicate that these are imminent threats for the country. The pattern of rainfall throughout the country has deviated widely, and the duration and intensity of the summer season has increased. All above factors suggest that water, food and energy security in Pakistan will face crucial time in near future.

Global warming is expected to cause continued fall in snowpack and earlier snowmelt which will lead towards the reduction in water supplies. By 2040, in Pakistan temperature is anticipated to rise by 3oC. Climate change impact studies unwraps that water availability are contrived to decrease by 10–30% over some dry areas of country. The Indus River is extremely susceptible to climate variability due to the high portion of its flow derived from glaciers. Thus Pakistan’s agriculture sector, which depends on glacier water, will face more extreme water shortage, variability and a potential reduction in water availability for agriculture.

There would be an increase in the intensity and the incidence of floods by increasing intensity and magnitude of precipitation especially as rainfall patterns have become unpredictable. More and prolonged warmer summer months, a continuation of contemporary retreat will eventually exhaust the glacial ice and reduce or eliminate runoff. So a reduction will occur in ability to irrigate crops and summer stream flows required to keep dams and reservoirs replenished.

Pakistan’s glaciers are expected to melt by 2035 which will have a disastrous effect on fresh water flows.

Studies have demonstrated that with just 1oC rise in temperature, wheat yield in Pakistan is estimated to decline by 6-9%. Even smaller increase in temperature can severely affect cash crops like mango and cotton. Crop growth periods relates to temperature. In annual crops like sugarcane, this rise in temperature will reduced time span between sowing and harvesting. The shortening of such a cycle could have an adverse effect on productivity because senescence would occur earlier. Horticultural crops are more vulnerable to changing conditions of climate for agricultural crops. Vegetables will be hit hard by temperature fluctuations.

Climate change will increase the attack of crop pests and diseases andimply spatial shifts in potential areas of agricultural sector. Global warming will cause an increase in rainfall in some areas, which will result an increase in humidity combined with higher temperature favors the development of fungal diseases similarly an increased pressure of disease vectors.

The climate change also affects grain and forage quality. Under elevated CO2 level the amylase content (major determinant of cooking quality) of rice grain will increased and zinc and iron concentration will decrease. Nitrogen uptake will reduce that will result into lower nutritional quality of crops. Episodic and scanty rainfalls due to changing in rainfall trend with the current continuity of climatic changes, leads to induce drought conditions.

In such a future scenario 20-30% production of live stock will decrease, creating juncture in meat, poultry and milk productivity.

Among major causes, human activities like burning of oil and coal and deforestation are main causes to heat up atmosphere as a consequence sea water is expanding.Due to this thermal expansion sea levels are anticipated to rise one meter by 2100, this would result in rise of water table, loss of agriculture land through erosion, saltwater mixing into surface water could mainly affect the agriculture sector. Effects of climate change on land resources of Pakistan are numerous. Out of 79.61mha (million hectare) of Pakistan, 22.05 mha is classified as cultivated area so further reduction in cultivated area. Land degradation and desertification, due to climate change is leading to problems such as soil erosion, loss of soil fertile lands, loss of biodiversity, flooding, salinization, and related carbon sinks.

There is need to adopt climate change strategies like; Development of those verities which can adopt the changing environment. Then it is the duty of extension wing to provide these innovations to the farmer community.Short duration varieties for wheat and other rabi crops should be introduced.

Climate change is responsible for this sorry state of affairs. Some of the affects of climate change are evident in different sectors of Pakistan. Agriculture, which is considered as a back bone of the country is believes to be severely affected.  Time has come for the policymakers to think seriously about this issue by adopting future strategies to save our motherland. There is a dire need to handle this sensitive issue with an iron hand otherwise it may engulf the agricultural system of Pakistan. 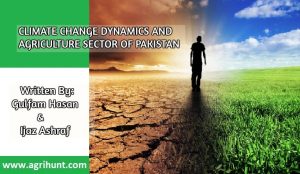