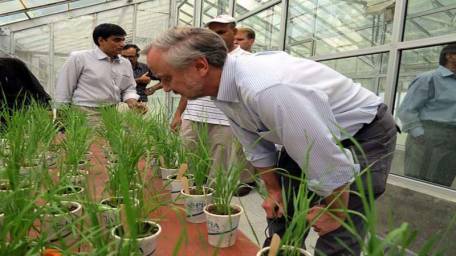 “Keeping in view the importance of NARC for research and agriculture development, the government must immediately reject the Capital Development Authority summary”, they said while attending a meeting at the headquarters of Pakistan agricultural Research Council (PARC).

Scientists and academicians have warned of food insecurity, hunger and starvation, if the research land of National Agricultural Research Center (NARC) was converted into a housing society as proposed by Capital Development Authority (CDA).

The Standing Committee on Cabinet is scheduled to meet on Thursday, August 6, to discuss the Capital Development Authority proposal which already has stirred severe reaction from all the segments of society including scientists, parliamentarians, educationists, businessmen, farmer associations and civil society.

Speaking on the occasion, former chairman PARC and NUREC Rector Dr Amir Muhammad said that country’s survival was linked with agriculture sector and this sector could not progress without research and development.

He said that establishment of a housing society on the research land tantamount to destruction of whole agriculture sector adding that this ill-thought decision would lead to starvation and hunger.

He urged the parliamentarians to play their role and save the agriculture sector from becoming the victim of land mafia. NARC was the symbol of federation so it should remain at the existing place, he highlighted.

Dr Muhammad Afzal said that converting the land into a housing society would be a foolish decision, as it would deprive the country of food. He was of the view that despite having strong provincial research set ups, there are strong federal research centres in other countries including USA and India.

Dr Iftikhar Ahmad while speaking on the occasion said that the justifications provided by Capital Development Authority for shifting NARC from the current location have no sound grounds and even the master plan of the capital city is against such moves.

Other participants of the meeting also strongly opposed the Capital Development Authority proposal and said that it was up to government now whether to lead the country towards food security or build housing societies amid starvation.

News published in The dailytimes.com.pk