How we can use RIDL technique for insect pest management?

RIDL means release of insect carrying dominant lethal gene. This is an environment friendly technique used against insect pest in agriculture and for household pests.

This technique is alternative to SIT technique. In SIT technique we rear millions of insects and sterilize usually with irradiation then release on the field. Wild females mate with sterile males and no produce on-viable eggs so, ultimately pest population decline.  Many successful story are present of SIT eradication of New World Screwworm, Mediterranean fruit fly, Melon fly from Okinawa islands of Japan, Queensland fruit fly in Australia, Mexican fruit fly in Northern Mexico, West Indian fruit fly in Northern Mexico, Codling Moth in Canada, Pink Bollworm in California. SIT technique have some limitations. Immigration of pre-mated females, Poor competitiveness of irradiated/chemosterilised males, Breakdown and semi-sterility of strains using translocation or other chromosomal rearrangements. In SIT technique we insert a lethal gene into the insect by using molecular biology techniques then control a range of pest by using this transgenic insect.

Mode of action in mosquitoes;

Accumulation of tTA in the cells causes insect death (transcriptional squelching): tTA is a lethal Gene. The accumulation of tTA is repressed by the presence of tetracycline: the lethality is conditional. One copy of the tTA gene in the genome is enough to kill the insect: the lethal gene is dominant. 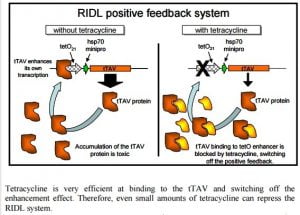