Chemical herbicides are used as the pioneer approach to control weeds. Herbicides can eliminate the most of the population weeds. This approach of handling the weeds are inexpensive also the results are immediate and invigorating. Everything has two aspects of its approach that if it has the advantages it alsohas the disadvantages. Advantages of chemical herbicides includes it mode of action is very rapid, its can reduce the maximum amount of invading weeds, these are very selective in its mode of action, many types of herbicides are available (broad leaves and narrow leaves) due its specific mode of action. But the disadvantages are countless if we just go its effect on the environment than we can realize that this thing is not only destroying our habitat but also the flora and fauna of our surrounding.

The basic effect on the environment is the pollution it’s causing in the surroundings. The herbicides are usually sprayed through the boom sprayer and the other approaches in the form of droplets. These droplets can travel a long distance in air thus its chemical can move to larger places.

The chemicals in the herbicides are responsible for the long term chemical pollution and also from there is the major chance of that these chemicals are taken up by the plants. From the plants this becomes the part of our food chain. Different chemicals are used in the manufacturing of the chemical herbicides. These chemical herbicides are responsible for many disease in the human being. It is responsible for the brain disorders in adults (Alzheimer’s disease, Brain Cancer, Parkinson’s Disease) breast cancer, asthma, and other bodily cancers. In infants it causes the autism and attention deficit hyperactivity disorder, developmental and learning disorders. It also causes the Leukemia, Lymphoma and Prostate Cancer. So these are the general health effect on the human health but the environment is not limited to humans. The bird population is at alarming stage. We are unable to see most of birds now a days to their extinction and and herbicides poisoning of the water and lack of proper habitat. Average forest and common birds population decline in Europe in 1980 to 2006 was about 10%, also farmland birds population decline was noted to be declined at about 48%. In USA there were three species that had be announced endangered due to excess herbicides use. Altogether 1211 bird species are threatened (12% globally of bird’s population) and 86% of these are threatened by the habitat destruction and degradation. There is a long list of birds that are near to extinct in Pakistan some of them are:

Leaching of the chemical herbicides in the soil is adversely affecting the water bodies and the lakes and other water recourses. The leaching of the nutrient in the water bodies is causing the eutrophication. Eutrophication is causing the bad aesthetic value to our surrounding. This also blocks the sunlight and thus reducing the ability of the sea plants and algae to produces more oxygen and food for the water animals. The major factor which causes the aquatic life destruction. Eutrophication is mare a point of discussion but main point when chemical herbicides enter in the water body then taken up by the aquatic animals. Most of these chemicals are responsible for the destruction of the aquatic life also on the large scale it causes the species to extict under water. Fresh water fishes have disappeared in our water bodies due to much more use the herbicides. . Over 6000 amphibian’s species were threatened. Atrazine affected the fishes and the frogs badly and a review also concluded that a thorough study is needed to estimate the hormonal effects of the atrazine on the aquatic life. Also the copper based herbicides are affecting the fish life badly and becoming the part of the food chain from there to onward till to human consumption..Herbicides leach down the ground water contaminates it, it proves very harmful for the aquatic life. Herbicides through leaching effects the aquatic ecosystems also causing the species extinction through the poisoning of the chemicals that are being used in it. Dicamba is toxic to mammals by ingestion or inhalation; it is also toxic to coldwater fishes when present in water bodies. Glyphosate was originally thought to have low ecological impacts, but is now known to have significant adverse impacts upon amphibians, fish, beneficial insects and nitrogen fixing bacteria.

Many aliphatics such as acrolein are strongly toxic to fish and wildlife. Amphibians are sensitive to many herbicides and their populations have experienced significant decline, and are known to have occasioned mutagenic and reproductive effects from herbicide exposure.

Habitat degradation and fragmentation are the greatest sources of amphibian population decline, but herbicides are important contributory factors to such habitat degradation. There are many mechanisms associated with herbicidal action upon amphibians including interference with enzyme activity and mutations, both of which reduce behavioral and reproductive fitness, and hence generally lead to amphibian population declines.

Herbicides may cause shift in weed population because of continuous use of certain chemical, chemicals of the same mechanism of action or family create selection pressure and development of weed races. Imbalance weeds population mainly when selective herbicides are used. Broad-leaf killers imbalance weed population toward dominance of narrow-leaved weeds and the opposite is true for narrow-leaved killers and broad-leaved proportions. Therefore, both types of herbicide groups should be occasionally complimented or alternated in the field.  Herbicide residues in plant materials. Herbicides are absorbed by crop plants as well as by weeds. Certain herbicides are completely metabolized while others are not. Herbicide carry- over problem and limitation in crop rotation options. This problem may be easily observed with some long persistent herbicides. Some examples are urea and sufonyl-urea herbicides Herbicide resistant weeds. Resistance is the ability of a formerly susceptible plant population to survive herbicide doses above that were used to control the original plant population.The development of resistance become apparent only after several years of repeated application of the same herbicide and is usually characterized by plants that survive a dose several too many times viz 20 to 1000 times or even more greater than normally needed for commercially acceptable weed control. If the herbicide can no longer bind to its site of action, it no longer has an inhibitory effect. Occasionally, differential metabolism, uptake, availability or movement will be responsible for the development of resistant.

Crop injury may be due to direct or indirect exposure of crop plants to herbicide molecules. Herbicide treated crop may show signs of herbicide injuries that may or may not recover from.

This is mostly related to herbicide rate of application, form used, surfactant added, time of application relative to crop physiological or morphological stages or prevailing climatic conditions at spray time. Herbicide persistence in environment may be in relation to half life of the herbicide and its rate of degradation in the environment. Certain herbicides have long half-life and persist in the environment for a long period of time that limits agricultural land uses. These however, may be traced in the soil, air, surrounding environment, ground water and even agricultural products and may become a serious threat to public health. Therefore, these chemicals should be avoided, highly restricted and only applied in absence of other alternatives and when are extremely needed. 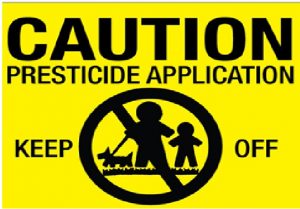