Question. Black and red beetles are munching on my flowers in Lahore. I haven’t seen them before and would like to know if they are harmful or just another insect looking for pollen. There also seems to be a black residue on plant leaves and the beetles are eating leaves too. What are they and what should I do about them? 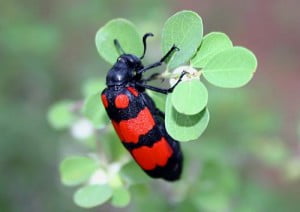 Answer. These are a type of ‘Cercopis vulnerata’ or ‘Spittlebug’ and actually, other than eating a few leaves, really don’t do any harm. Earlier in the season, you may have noticed what resembles ‘spit’ on some plant joints and the beetle larvae emerges from this – hence the name ‘Spittlebug’. If the presence of these beetles bothers you then next time you see ‘spit’, hose it off with a jet of water to prevent them hatching out. The black residue you mention has nothing to do with them but may be either ‘sooty mildew’ or some other fungal disease: This can be removed by washing off with soapy water unless, that is, the infection is severe, in which case either remove infected leaves – disposing of them sensibly – or, in extreme cases, remove the entire plant.