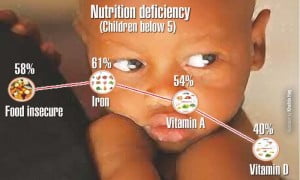 A CONFERENCE in Lahore last week highlighted some worrying aspects of the nutritional scenario among the country’s population and bemoaned how every suggested remedy is being consigned to the dustbin of policymaking.

This is despite the fact that the nutritional crisis for the nation is escalating and is currently costing the country 3pc of GDP, according to the Copenhagen Consensus.

According to statistics presented at the conference, 58pc of children below the age of five are food insecure, 44pc have stunted growth, 15pc (the international standard for declaring emergency) are categorised ‘wasted’ — where the child does not get enough nutrients to develop basic muscles of the body — and 32pc of them are underweight.

Explaining further, the conference was told that 60.9pc of the children are anaemic and 54pc and 40pc have deficiencies of Vitamin A and Vitamin D respectively.

Meanwhile, various surveys, strategies, policies and plans are rusting on shelves in federal and provincial offices, allowing the situation to worsen by the day.

Animals and poultry used to be sources of milk and egg for children and small incomes for their parents. With both these businesses now getting delinked from their rural roots, these areas have fallen prey

“With 58pc children being food insecure, 61pc lacking iron and 54pc deficient in Vitamin A, the kind of generation Pakistan is developing is not hard to understand,” remarked one of the participants.

The farmers and the experts agreed that at the heart of the crisis lies the squeezing of agriculture and livestock-related businesses in rural areas, which have unleashed almost unprecedented poverty in these areas. The above-mentioned statistics are direct manifestation of the same.

Unless the federal and provincial governments develop, foster and sustain rural entrepreneurship, no amount of effort and direct fiscal subsidy would help the rural areas, which host an overwhelming majority of these malnourished children, and change the national nutritional picture.

Rearing animals and poultry, which used to sustain life and health in the rural areas, has become next to impossible because of various government policies. For farmers, livestock provided a crucial fallback option. For the landless, they provided livelihood.

That is why livestock formed 56pc of the agriculture sector as it overlapped between both the landed and the landless.

With the import of cheap skimmed powder milk, the livestock economy has been put upside down. With massive concentration of the poultry business in urban areas, traditional poultry outfits have run out of financial attraction in rural areas. Animals and birds used to be sources of milk and egg for children and small incomes for their parents.

With both these businesses now getting delinked from their rural roots, these areas have fallen prey to rampant poverty.

Unfortunately, the recipe that the policymakers have come up with is not only sketchy but is also adding to the problem.

For example, Punjab has kept some money in its budget this year and imported Rs1.5bn worth of nutrients so far.

These imports, say experts, will not help for two reasons. First, medicinal nutrients are far less effective as compared to their biological counterparts. Second, they are only consumed in urban areas, whereas the nutritional crisis is, by and large, a rural phenomenon.

The country lacks a national plan and provincial efforts are limited in scope and reach. The federal and provincial governments will do better if they realise that children’s health is a multifaceted phenomenon and unless all stakeholders (farmers, industry, regulatory bodies, scientists, academicians etc) put their heads together, the chances of success will remain limited.

But the most crucial factor will be promoting rural entrepreneurship that can sustainably deliver. Otherwise, all the government’s efforts will be doomed to fail if the residents of rural areas cannot earn their own livelihood.