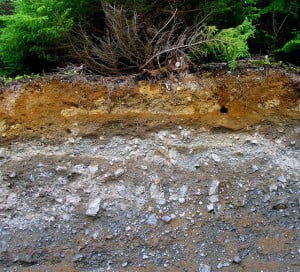 This answer expands on the answer in the last post: How can so me soil be older than other soil?

Soil scientists describe soil as a natural body that forms as the result of five factors:Climate, Organisms (plants, animals, and microorganisms), Relief (shape of the landscape), Parent materials, and Time.

These five factors are referred to as ClORPT, for short.

Temperature and precipitation are the mainclimate factors that make soils different from one another. Precipitation determines how much water moves through the soil, and minerals and salts dissolve in, and move with, the water. Climate and temperature also help determine which plants and other organisms live in the soil.

The types of organismsliving in soil and the decomposition products of plant and animal tissues and wastes—or “humus”—in turn affect soil color. Organisms and humus also affect and the size and shape of the clumps of particles, called “peds,” that make up the soil’s structure.

Soils also differ from one another thanks to the shape of the landscape, or relief. Soils on slopes, for example, often experience more erosion and thus are shallower than soils on the top of a hill. Soils at the bottom of the slope are often much deeper due to the deposition of the eroded soil from the slope above.

Parent materials are the stuff from which soils develop, including minerals and rocks. Some soils form directly over bedrock, but many soils form in materials transported and deposited by glaciers, gravity, wind, rivers, lakes, or oceans. Soils inherit properties from these materials, including particle size and minerals. The minerals contribute color, as well as chemical factors that affect pH and the availability of nutrients. Some minerals are softer than others, and weather more easily.

All soil-forming processes take time. Younger soils are typically shallower and often more fertile than older soils. It typically takes less time for a soil to form in sediments deposited by wind than from bedrock, because plants can readily grow in sediments. Bedrock, on the other hand, has to weather first into soil-sized particles.

As you drive around your city, state, or country, look at your surroundings. Think about which ClORPT factors are different. If you have a chance, dig a hole, look at a trench or a place where the road cuts through a hill, and observe the differences. Color is an obvious difference, others are more subtle. Take the soil in your hand, get it wet. Is it gritty, squishy, or can you roll it between your hands to form a worm?

Soil is fascinating, and you are asking the right question to begin a lifetime of discovery!