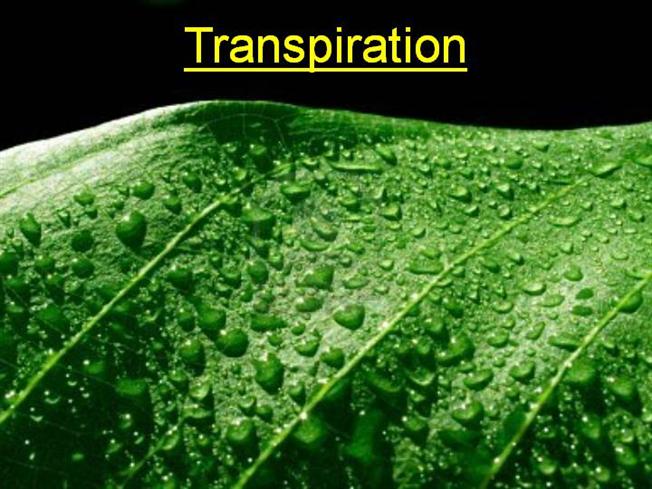 Transpiration is the phenomenon of transfer of water or water vapors from plants to the atmosphere through leaf stomata of plants. Plants absorb soil water through their root hairs present deep in ground attached to primary/secondary roots of plants (For example, corn plants have roots that are 2.5m deep, while some desert plants have roots 20m deep in the soil). Plants also pump the water up from the soil to supply nutrients to aerial plant parts i.e., leaves, stem flower etc. This pumping is driven by the evaporation of water through small pores called “stomates”, which are found on the undersides of leaves. Transpiration accounts for approximately 10% of all evaporating water. It also includes a process called guttation, which is the loss of water in liquid form from the uninjured leaf or stem of the plant, principally through water stomata. According to resent studies it has be revealed that about 10 percent of the moisture found in the atmosphere is released by plants through transpiration. The remaining 90 percent is mainly supplied by evaporation from, ocean, seas, lakes, rivers, streams etc.

Plants put down roots into the soil for nutrient and water up take to the stems and leaves. Some of this water is evaporated to the air by a phenomenon known as transpiration (when combined with evaporation, the total process is known as evapotranspiration). The transpiration rates vary extensively depending on weather and climatic conditions, such as temperature, humidity, sunlight availability and intensity, precipitation, soil type and saturation, wind, land slope, and water use and diversion by people. During dry periods, transpiration increase the loss of water in the upper layer of soil, which effect vegetation, horticultural and agronomic field crops.

Plant transpiration is an appealing and much invisible phenomenon, since the water is evaporating from the surface of plant leaf, you don’t just go out and see the leaves “sweating”. Just because you can’t see the water doesn’t mean it is not being put into the air, though. During a growing season, a leaf will transpire many times more water than its own weight. An acre of corn gives off about 3,000-4,000 gallons (11,400-15,100 liters) of water each day, and a large oak tree can transpire 40,000 gallons (151,000 liters) per year.

Rate of transpire varies greatly geographically and over time. There are different factors that can affect the rate of transpiration as discussed below.