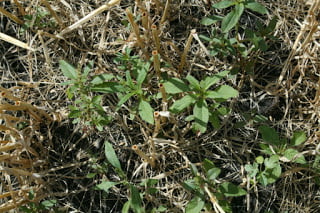 Recent travel across Minnesota highlights that it is small grains harvest time. Thrashed fields have a clean look, especially from the highway. However, closer examination reveals a great number of weeds, especially waterhemp, emerging from the stubble. More swathing due to uneven harvest maturity and significant lodging resulted in weeds getting a head start this season.

Controlling weeds post-harvest is an essential component of the weed management strategy, since we want to establish zero tolerance for weed escapes and new weed seeds entering the seed bank. Like always, begin by scouting fields and observing weed spectrum and size. Some weeds may have been cut by harvest equipment and are stems with insufficient leaf surface to intercept herbicide application. Allowing time for regrowth to occur will ensure their control. Several strategies you may consider include the following:

Tillage is an effective means for controlling small weeds. However, first answer the question, “Were there weeds that may have gone to seed in harvested fields?” Some weeds, such as redroot pigweed, can produce viable seed in as little as 10 days after flowering. If weeds have produced seed, consider delaying tillage to allow field mice and birds to eat seeds. Seeds are a source of energy for insects, birds and rodents. An internet search indicates predators of weed seeds can reduce total number of seeds on the soil surface by 5% per day and over time, consume 20 to 90% of seed on the soil surface. In contrast, tillage after harvest will greatly reduce predation as seeds are buried.

Chemical fallow
There are non-selective and residual herbicide options for controlling weeds post-harvest. Depending on the percentage of glyphosate resistant weeds already present in a field, timely foliar applications (6 inches or less in height) of glyphosate at 0.75 to 1.5 pounds acid equivalent plus 2,4-D amine at 0.75 to 2 pounds (higher rate for perennial weeds) can reduce the level of broadleaf infestation in the stubble field. Based on experience in Kansas winter wheat stubble treatments for broadleaf (pigweed) control, the use of gramoxone (Paraquat) at 0.38 to 1 pounds in 15 to 20 gallons of water per acre also provided good control, but only to small weeds, since it is a contact action herbicide. Please be aware of rotational restrictions to 2016 crops or if planting a 2015 late summer/fall cover crop.

While mowing can be effective for broadleaf weeds that are tall enough to be cut off below the height of the weed seed head, keep in mind that more broadleaf weeds may emerge later in the summer due to changing soil moisture conditions, timing of small grain harvest and delayed germination. Thus, the initial mowing may need to be followed up with additional mowing, in case of late weed emergence or continued growth of the broadleaf weeds from axillary buds located lower on the weeds which are below the initial mowing height.

Know the biology of the weeds you are trying to control. For example waterhemp is a summer annual weed that germinates much later than other pigweed species, mid-May and into July and August in fields in southern and west central Minnesota. Waterhemp can germinate and emerge from the soil surface to one-half inch deep in the soil and can remain viable for at least four years in soil. A few weed escapes in ‘year one’ can lead to a severe weed problem in a field by ‘year three’. Prevention of seed production can pay dividends if maintained for approximately a four-year time period. A field experiment conducted in Urbana, IL, from 1997 to 2000 allowed a heavy field infestation of waterhemp (approximately 40 plants per square foot) to set seed in 1996 and was not allowed to go to seed after 1996. In 1997, 1998, 1999, and 2000, the percentage of the original waterhemp seed bank that remained was 39, 28, 10, and 0.004%, respectively. Weed seed bank management will become increasingly important as waterhemp, kochia, common and giant ragweed biotypes develop resistance to multiple herbicide sites of action.

Scout and plan for the future