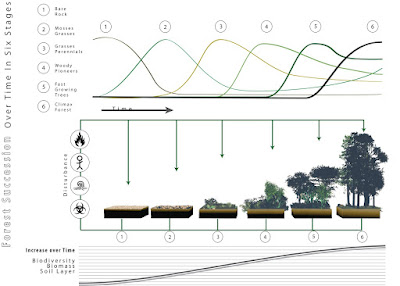 In ecology, as well as in Permaculture, there is a concept known as succession. This is the idea that an ecosystem will transition through stages of growth and maturation. To look at it simply, an empty field will first grow weeds and grasses then shrubs and small fast growing trees then more mature, longer-lived trees until a forest is formed. The individual species and final result will vary depending on where in the world this occurs with its macroclimate and microclimates taken into account. How do we define the basic steps in succession starting from a piece of bare, lifeless ground to a self-sustaining forest? There are a number of ways to categorize and describe it; following is the system I prefer:

Of course, since this is nature, there are a number of problems with any simplistic generalizations. First, there really is no place that naturally occurs where there is Bare Soil and no life. Man has created a few of these places, way too many, in fact, but they are very uncommon. Second, at the other end of our succession scale we find Climax. Unfortunately, in nature we rarely find a place that is in true Climax either. Third, succession is not linear. What we really see in nature is a piece of land in various stages of succession. There may be a large forest somewhere close to a Climax stage when a storm blows down a massive tree. The sudden opening of the canopy, which lets in a lot more light, causes that one section to revert many years or decades, maybe to the Oldfield stage. Forest fires, floods, drought, pests, disease, and man-made interventions like logging, mining, etc. can all cause adisturbance in the natural progression of linear succession. What we actually see in nature is a constant cycling back around through these stages. This is known as a Shifting Mosaic. In the Shifting Mosaic theory there are a few phases:

Again, this does not perfectly describe what happens in nature. Ecosystems will cycle through the disturbance, reorganization, aggradation, transition phases only to be hit with another disturbance before a steady state has been reached. This will happen over and over again. Also, the idea of a stead state is also not static or stable. There are always shiftings of species diversity and plant density and small disturbances with isolated reorganization and aggradation here and there. I love David Jacke’s phrase for this: Cycles of Succession and Wobbling Stability.It is important to keep in mind that this non-linear journey of succession actually leads to a more diverse ecosystem in the long run. There are more opportunities for new plant species to grow and develop a niche. So there you have it. A quick primer on ecosystem succession. I’ll be writing soon on how to apply this to Permaculture design.