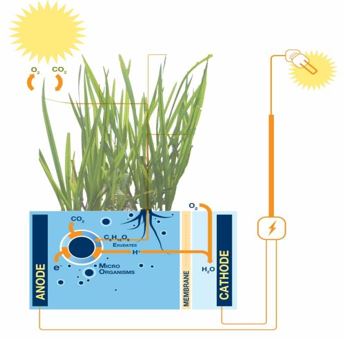 Plants Generating Electricity? Can a lawn charge your electric car?  Can a wetland or rice paddy field be turned into a power plant without harvesting the plants?

Living plants in microbial fuel cells might be integrated in wetlands to create large-scale green power plants. How does that work? Plants photosynthesize organic matter using solar energy. A significant part of this organic matter is released into the soil. There electrochemically active micro-organisms break down the organic matter producing electrons which are transported to thAll Postse anode of the fuel cell. The energy rich electrons flow through a load to the cathode to generate 24 hours per day electricity.

The idea for this technology came from Dr. Ir. Bert Hamelers. In 2008 the proof-of-principle of the technology was published (Strik et al. 2008; De Schamphelaire et al. 2008). From 2009 to 2012 a European consortium explored new areas of science to develop the plant-microbial fuel cell. This project resulted in spin-off company Plant-e that develops and produces products in which living plants generate electricity.
Plant-e develops products in which living plants generate electricity. These products are based on technology that was developed at Wageningen University, which was patented in 2007. The patent is now held by Plant-e. The technology enables us to produce electricity from living plants at practically every site where plants can grow. The technology is based on natural processes and is safe for both the plant, and its environment. 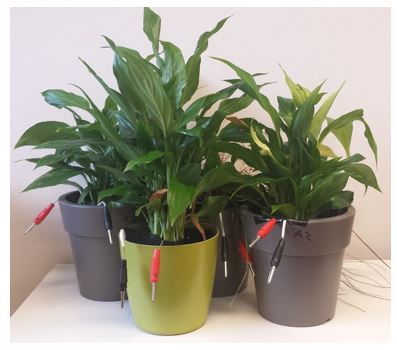 Via photosynthesis a plant produces organic matter. Part of this organic matter is used for plant-growth, but a large part can’t be used by the plant and is excreted into the soil via the roots. Around the roots naturally occurring micro-organisms break down the organic compounds to gain energy from. In this process, electrons are released as a waste product. By providing an electrode for the micro-organisms to donate their electrons to, the electrons can be harvested as electricity. Research has shown that plant-growth isn’t compromised by harvesting electricity, so plants keep on growing while electricity is concurrently produced.
In many ways, plants are the ultimate solar energy technology. Through photosynthesis, plants operate at nearly 100 percent quantum efficiency, meaning that for almost every photon of sunlight that’s absorbed, they produce an equal number of electrons, so it’s no surprise that for years scientists have been trying to either mimic that process through creating artificial leaves or have found ways to tap plants themselves as energy sources.
We’ve seen technologies where the electrons in the soil near plants’ roots was are used to power a fuel cell and concepts for moss-powered lamps, but this discovery from University of Georgia researchers taps photosynthesis directly for producing electricity.
During photosynthesis, plants use sunlight to split water molecules into hydrogen and oxygen, which produces electrons. Those electrons help create sugars that plants use to fuel growth and reproduction.
“We have developed a way to interrupt photosynthesis so that we can capture the electrons before the plant uses them to make these sugars,” said Ramaraja Ramasamy, assistant professor in the UGA College of Engineering.
The university explains the device
Ramasamy’s technology involves separating out structures in the plant cell called thylakoids, which are responsible for capturing and storing energy from sunlight. Researchers manipulate the proteins contained in the thylakoids, interrupting the pathway along which electrons flow. These modified thylakoids are then immobilized on a specially designed backing of carbon nano tubes, cylindrical structures that are nearly 50,000 times finer than a human hair. The nano tubes act as an electrical conductor, capturing the electrons from the plant material and sending them along a wire.
In their experiments, the researchers found that the device delivers electrical current levels that are two orders of magnitude larger than those reported in similar systems. The team is currently working to stabilize and increase the power output of the device before commercialization can be considered, but they already see it as an energy source for low-power gadgets.
“In the near term, this technology might best be used for remote sensors or other portable electronic equipment that requires less power to run,” Ramasamy said. “If we are able to leverage technologies like genetic engineering to enhance stability of the plant photosynthetic machineries, I’m very hopeful that this technology will be competitive to traditional solar panels in the future.” 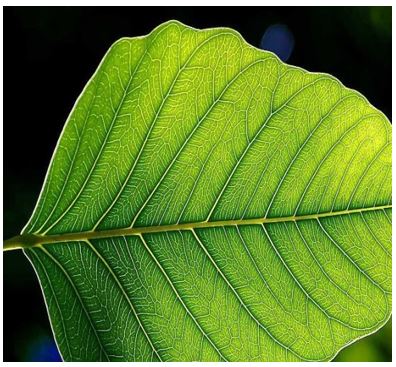 Harvesting electricity directly from the best solar power plants in the world (photosynthetic plants)? Sound too good to be true? Well it may be a possibility in the near future, thanks to new research from the University of Georgia.
Researchers there have developed a way to “interrupt” photosynthesis and redirect the electrons before they are used to make sugars. If you’re wondering why this is a potentially importent discovery, it’s because photosynthetic plants function at nearly 100% quantum efficiency. What that means is that almost every photon of sunlight that is captured by the plant is converted into an electron. For comparison, most of the solar cells of today operate at about 12-17%. That’s a huge difference, and potentially a huge improvement in efficiency for solar energy generation. Though, of course, that’s only if the technology and economics can be worked out….
“Clean energy is the need of the century,” said Ramaraja Ramasamy, assistant professor in the UGA College of Engineering and the author of the paper published in the Journal of Energy and Environmental Science. “This approach may one day transform our ability to generate cleaner power from sunlight using plant-based systems.”
For a bit of background, during photosynthesis, the photons that are captured by the plant are used to split water molecules into the component parts of oxygen and hydrogen. By doing so, they produce electrons. The electrons are then utilized by the plant to create sugars that are then used by the plant (and the animals that eat it) for growth and reproduction.
As a result of the first, small-scale experiments of this technology, electrical current levels that are two orders of magnitude larger than any previously reported in similar systems have already been produced.
There is obviously a great deal that would still need to be done before such a technology could be commercialized, but it’s definitely an interesting one….
The researchers are currently working on improving the output and stability of the technology.
“In the near term, this technology might best be used for remote sensors or other portable electronic equipment that requires less power to run,” Ramasamy said. “If we are able to leverage technologies like genetic engineering to enhance stability of the plant photosynthetic machineries, I’m very hopeful that this technology will be competitive to traditional solar panels in the future.”
“We have discovered something very promising here, and it is certainly worth exploring further,” he said. “The electrical output we see now is modest, but only about 30 years ago, hydrogen fuel cells were in their infancy, and now they can power cars, buses and even buildings.”