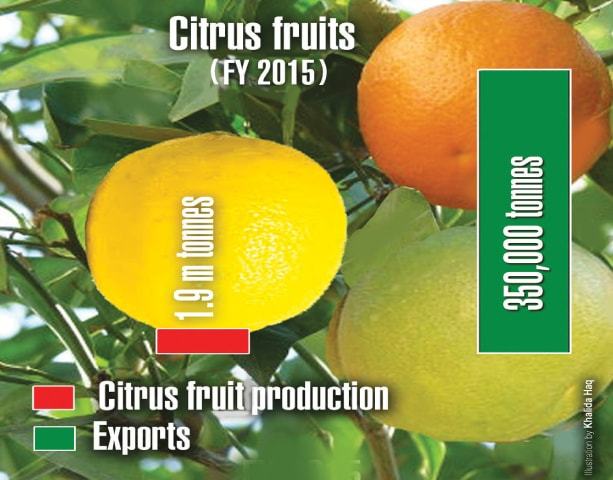 “But much depends on export pricing,” says an official of TDAP. Exports to the Gulf and European countries fetch higher per-unit price, shipments made to countries like Afghanistan, Bangladesh, China, and Central Asian states have to be priced keeping in view such important factors like production of citrus fruits in the buyers’ own, or neighbouring countries, and income levels of the end-consumers of the importing nations.

Officials and exporters are optimistic, however, that the per-unit price of citrus fruits would be higher this year because of ongoing improvements made in grading and packaging of the fruits, particularly kinnow.

They anticipate this in continuation of a trend that was set back in FY14. In that year, the average fob price of kinnow had risen to $450 per tonne, up from about $425 in FY13. Officially recorded export price for FY15 is yet to be released.

On the production front this year, the country is expected to produce no less than 2m tonnes, up from 1.9m tonnes last year, according to estimates of officials of the Ministry of National Food Security and Research.

This year, the disease attack has been less severe and not widely spread. Besides, fruit farmers have adopted better integrated pest management control system to ward off diseases, fruit growers claim.

One aspect of exports of citrus fruits that has long been neglected is about the total mix of these fruits in which the share kinnow remains more than 90pc and that of oranges and other citrus fruits less than 10pc. TDAP officials say export earnings of citrus fruits can rise dramatically if Pakistan can produce larger exportable surplus of non-kinnow citrus fruits that often fetch double and even higher per-unit export price than kinnow.

They also say demand for our seamless kinnow has been on the rise not only in European and Gulf countries but also in Far Eastern markets like Malaysia, Hong Kong and Singapore. This particular variety of kinnow whose production is currently very low is also an export revenue spinner.

Exports of citrus fruits during this season can exceed last year’s earnings of $200m, if an impending ban on sales to Indonesia is averted and if traditional and newly-found markets are exploited adroitly.

Our embassy in Jakarta has warned that if those issues (mainly pertaining to the fruit quality and packaging) are not resolved, Indonesia may slap a ban on imports of citrus fruits from Pakistan from January.

Officials of Trade Development Authority of Pakistan are in touch with both Pakistani embassy there and the Indonesian authorities to avert the threat of ban.

“Last year, a couple of imprudent exporters had exported inferior quality citrus fruits to Indonesia which has led to this episode,” one of the TDAP officials confided to Dawn.

Last year, 350,000 tonnes of these fruits worth $200m were exported and this year export earning can rise even higher, exporters say. “Unlike in the past season we’re exporting citrus fruits, particularly kinnow, also to European countries,” says a Karachi-based exporter. “We’re starting shipments to Europe from December,” he said.

In the last season, most exporters could not export citrus fruits to Europe fearing rejection of shipments after the attack of canker disease on the fruits in December.

Later on, 4000 tonnes of the fruits were exported to several European countries including UK, Canada, Sweden and the Netherland.

In addition to brighter prospects in European countries, exporters are also counting on continuation of exports to Russian market where last year 100,000 tonnes of citrus fruits were exported.

This year even larger exports to Russia are possible, according to fruit exporters who exported kinnow and other citrus fruits there last year. Many of them have already got export orders for this year and some of them have even started shipments, market sources reveal.

They say that the Russian market is also being accessed by some exporters via Central Asian states where Pakistani citrus fruits have lately captured a tiny share. Some exporters have established trade links in Kazakhstan and Tajikistan from where they are tapping export potential in other Central Asian states and Russia, they say. Varieties of our red blood oranges, grape fruits and seamless kinnow have great demand there.

Exports of citrus fruits to our traditional markets in the Gulf countries are also expected to remain high this year after enforcement of ban on wooden crates for export packaging, exporters say.

“Moreover, our exports to newly found markets like Malaysia, Mauritius Bangladesh, Sri Lanka and, to some extent, China are sure to remain strong” a leading exporter told Dawn.