Agronomy is the basic branch of agriculture which deals with the study of principles and practices of crop production and field management. The foundation of agronomy based upon some basic principles such as tillage, seed, sowing time, sowing method, crop production, crop rotation, water management, nutrients management, plant protection measures, post harvest management and marketing. Tillage has unique importance in the above mentioned principles for production of crops and management of field. Tillage can be defined as physical manipulation of soil with help of tillage implements and tools to improve the soil structure and upper layer of soil to provide better environment and conditions for seed germination and growth.
As science improves everyday and make progress in all fields and introduce new ideas and technologies for improvement of life standard of human beings. Similarly agronomists also develop some modern techniques for sustainable agriculture which can provide food security to the tremendously increasing population of world. No-Till cultivation or zero tillage cultivation is also a modern technique in the science of agronomy.
As the name of technology indicates that you have no need to any type of physical manipulation or preparation of soil before seed sowing. In this technique you go for direct seed sowing just after the harvesting of previous crop even without removing the stubbles and crop residues. 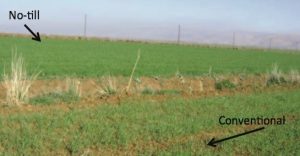 In conventional methods, farmers performed primary tillage operations after the harvesting of previous crop to remove stubbles and to level the soil then moved for secondary tillage operations to prepare seed bed. It not only increases labor cost but also wastage of time as compared to no-till cultivation. This method not disturbs the soil structure and soil level. It is best technique to save cost as well as time especially in the areas where soils are subjected to water and wind erosion and requirement of energy and labor for tillage is too much high. In conventional tillage techniques there is a huge water losses during soil manipulation specially in hot summers but this modern technique save that water and provide it to next crop. Previous crop residues act as mulch on the soil results in the reduction of water losses from soil. On other hand these residues also provide basic nutrients to the next crop which are necessary for better growth. Due to more organic matter in field, soil structure improves and provide better environment not only for the better growth of desired crop but also provide better environment for growth of beneficial micro organisms. In conventional tillage techniques when we plough the soil at same depth for a number of times in the year, it results in the formation of hard pan in root zone which restrict the growth of roots of our desired crop results in poor yield and quality. Hard pan restrict the water infiltration which causes suffocation to the micro organisms present in root zone and poor development of roots network. Primary tillage operations also kill the beneficial earthworms present in soil upper layer. These earthworms are necessary for better soil structure. No-till cultivation provides them protection and habitat for their growth. These all mentioned factors in this paragraph results in better yield with no-till cultivation than with conventional techniques of cultivation.

As soil has a number of pores which holds water molecules, carbon dioxide, nitrogenous compounds and many other gases. These water molecules and nutrients present in pores are available for plants usage. But when we performed tillage operations at farms these molecules escapes from the pores and goes into the atmosphere. All nitrogenous compounds (nitrates, nitrites) when enter in the atmosphere they changed into acids (nitric acid and nitrous acid) by lightning. When these acids mix with rain water they produce acid rain which effect both plant and animal life.
All nitrogenous gases, water molecules and especially carbon dioxide gas when enter in the atmosphere they form a layer around the surface of earth. When sunlight reflected by earth’s surface in the form of long wave infra red rays, these gases act as glass house and trap the infra red rays results in the increase average temperature of earth known as “global warming”. Global warming is a great threat to all types of life on the planet earth. Climate changes due to global warming results in ice melting of icecaps, glaciers melting and flooding. Floods destroy the irrigation system structures dams and canals filled with mud and agricultural fields and standing crops in the fields destroy every year by floods. Global warming also destroys the natural beauty of islands near the oceans because by the increasing temperature level of sea water also increases and islands changes into oceans. No-till cultivation helps to trap the access amount of carbon dioxide and nitrogenous gases in the soil. These trapped nitrogenous gases changes into nitrates and nitrites by the activity of micro organisms and finally used by plants. So in this way no-till cultivation have dual benefit by trapping these gases in the soil.
Limitations:
 Previous crop residues may act as habitat for different populations of insect pests.
 Crop residues may transfer disease are disease causing agents to the next crop.
 There is more need of herbicides (chemicals) for control of weeds which otherwise killed by primary tillage operations.
Conclusion:
Conventional methods of tillage require about 15-20 days for cultivation of next crop after the harvesting of previous crop. But in this modern era the gap of 15-20 days between two crops is not economically fair the farmers. On the other hand this reasonable gap between two crops cannot provide sufficient food for increasing population of the world. The basic theme of agriculture is provide food security to the whole world but as population of world increases day by day but cultivated area reduces due to urbanization, industrialization, roads constructions, railway tracks and many other factors creating by man. So there is a need to get more yields from same area by use of advanced technologies.
Secondly at this time world suffers with the problem of increasing average earth’s surface temperature known as global warming. So no-till cultivation is necessary to provide food security to the increasing population as well as to reduce global warming which results in the protection of natural beauty. 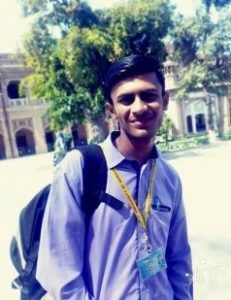